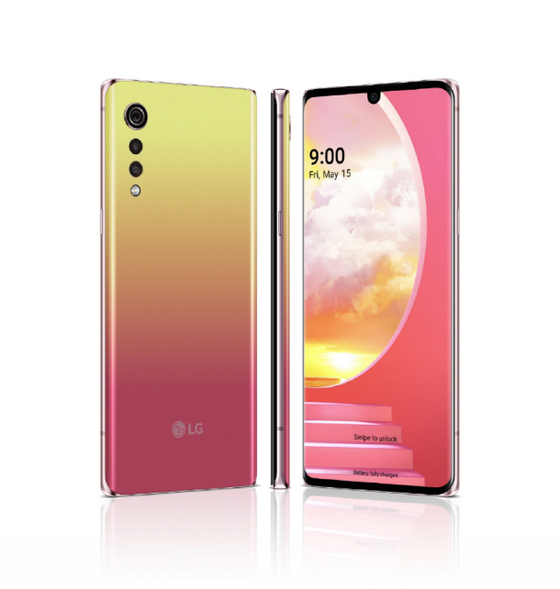 As the tech giant moves to rebuild its smartphone business from scratch after years of losses, LG Electronics announced Tuesday that its new Velvet smartphone will launch domestically on May 15.

The product will be available through Korea’s three mobile carriers and retailers. Last week, LG offered a preview of the Velvet’s design in a YouTube video, showing its curved edges with rear cameras aligned in a single line ? a feature the company describes as the “raindrop” camera. The model will be available in white, gray, green and orange-pink.

As new releases are becoming more “difficult to distinguish by technical specifications alone,” the company said it would focus on individual brand names for each product with a matching design.

The phone will be powered by Qualcomm’s 5G chipset, the Snapdragon 765. It’s the chipmaker’s first application processor combined with a modem, which Qualcomm says will create more efficiency. It has battery capacity of 4,300 ampere hours.

The Velvet will have a 6.8-inch FullVision display with a 20.5:9 aspect ratio. In terms of sound, the model will have a feature to analyze the game or video being played and optimize the output. A news report, for example, will be adjusted to increase the reporter’s voice to stand out more against a noisy background.

The back of the phone includes a 4.8-million-pixel camera, 8-million-pixel wide-angle camera and a 5-million-pixel in-depth camera. In settings with low light, the Velvet will use quad binning technology to combine four pixels to produce a clearer photo.

Audio features for video filming were upgraded as well. The “Voice Out Focus” can refine audio from voices against background noise. Users can also adjust the level of recorded background noise.

Like LG’s V50 and V60 ThinQ, the Velvet will also have an attachable accessory to make it a dual-screen phone. Introduced last year, the frame accessory allows for a connection to a second screen.

The Velvet will be the company’s first new product under an overhaul of its struggling smartphone business. Upon announcing the release of the new phone earlier this month, LG said it would discontinue its high-end G and V lineups.

“The LG Velvet was designed to be clean-cut, with the aim that its external features will create the urge to touch. It will be a product that fulfills customers’ demand for a different smartphone,” said Chang Ma, senior vice president of product strategy at LG Mobile Communications Company.