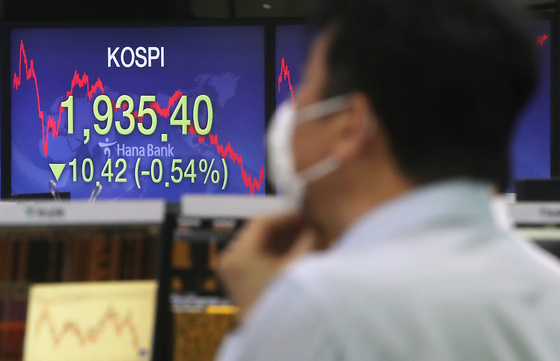 Closing Kospi is displayed on the screen of the dealing room of Hana Bank in Jung-district, central Seoul, Monday. The Kospi closed 10.42 points lower than the previous session at 1,935.40 [YONHAP]


Stocks closed lower Monday paring early gains due to growing concerns over a Covid-19 cluster infection. The won fell against the dollar.

After opening higher, local shares slipped into negative terrain on growing concerns over a new cluster infection in Seoul.

The number of infections linked to nightclubs and bars in the central district of Itaewon totaled 86 nationally as of noon.

The country had been adding fewer than 15 cases of the new coronavirus infections since mid-April, with the number of domestic infections even falling to zero at some points, before rebounding to 35 cases Monday.

"The market is expected to experience ups and downs depending on the related reports on the new wave of infections in the country," said Seo Sang-young, a researcher at Kiwoom Securities.

The market slump, however, was still limited on the rising hope over the resumption of global business activities, with major nations deciding to gradually lift all-out lockdowns.