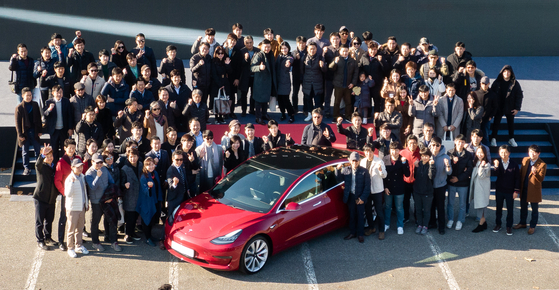 Tesla was the third most popular imported car in the first quarter thanks to its more affordable Model 3 electric car.

According to the Ministry of Trade, Industry and Energy, Tesla sold a total of 4,070 vehicles from January to March, ranking third after Mercedes-Benz's 15,400 units and BMW's 11,331.

The U.S. electric automaker ranked higher than Chevrolet with 3,810 cars, Volkswagen with 3,535 and Volvo and Audi with 3,190 units each. The company also sold more electric cars domestically than Hyundai Motor and Kia Motors combined, at 2,881 units, and reached almost half of all electric car sales in the country for the first three months, at 8,831 units.

The automaker’s sales in Korea have been zooming since November, when Tesla launched the Model 3 series here.

Tesla offers the Model 3 starting at 53.7 million won ($44,500), relatively expensive compared to gas or diesel cars but much cheaper than the original Teslas. In terms of performance, the Model 3 boasts higher than usual offerings in the market with the lowest-performing trim rated at 211 kilowatts (283 horsepower) and 35 kilogram-meters (253 pound-feet) in torque. The highest offering of the Model 3 can exert up to 353 kilowatts and 63.9 kilogram-meters for torque.

Tesla’s eco-friendly lineup has been popular in Korea as the government offers tax incentives and subsidies to people who buy environmentally-friendly vehicles. For the Model 3, the government subsidy can reach up to 8 million won.

Domestic automakers have had their production and sales disrupted by the coronavirus pandemic, and import automakers have benefited. According to the Korea Automobile Importers & Distributors Association (KAIDA), aggregate sales of imported cars for the first three months this year rose 4.8 percent from a year earlier to 54,469 units.

With that trend, some expect Tesla’s local sales to continue to remain strong this year.

Sales data for Tesla in the first quarter was released by the ministry as the company didn’t register itself as an importer with KAIDA.