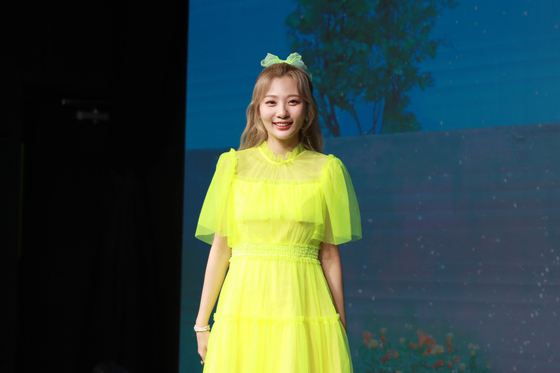 Ahn Ji-young may be the only member of indie band BOL4 remaining, but the band's music is as sweet and full of love as it ever was.

Singer Ahn Ji-young held a showcase for her new release "Puberty Book II Pum" on Wednesday. It was the first time she has appeared as BOL4 since her partner and guitarist Woo Ji-yoon left the band last month. With her new five-track EP, Ahn is ready to start a new chapter while carrying on with the band’s trademark sound and adding her distinct style to it at the same time.

“There was a change to the band, and I do feel nervous to do this without a friend who I’ve been together with for four years,” said Ahn. “But I will try my best to perform BOL4’s music.”

“Puberty Book II” is part of BOL4’s “Puberty Book” series that began in April last year that carries “all the sentiments of adolescence” according to Ahn. Just as the first part carried both the sweet and fresh feelings of youth as well as the emotional turbulence that people go through, “Puberty Book II” uplifts and consoles listeners. As always, Ahn flaunted her musical talents by composing and writing all the songs on the album.

“The ‘Puberty Book’ series is mostly about the emotions of youth, especially love,” she said. “There are a lot of people who I love, like fans, friends and family. Thanks to them, I was able to do what I do best and saw myself doing that.”

The two lead tracks, “Hug” and “Leo” do just that. With “Hug,” Ahn expresses the warmth of a hug between people that love each other and how that warmth doubles when you are not alone. “Leo” is an extra special song in that this is the first time a singer outside of BOL4 — in this case boy band Exo's Baekhyun — has been featured in one its songs. Leo is the name of Ahn's cat, and the song is about how her cat loved the smallest things and the feelings of love she felt for her cat.

“I’ve always wanted to write a duet, and when I sent him the song, he told me that the song was so nice and that he’d join. I think his voice and mine harmonized well, and I’m really proud of the song,” she said.

Woo left the band on April 2, which left Ahn as the only member of BOL4. The showcase was a chance for her to officially share with the press her thoughts on her partner leaving and also her determination to lead the band on her own. When asked how she felt after Woo left, Ahn said that BOL4 won’t change just because Woo left, but it will change in the ways that a band changes over time through music.

“At first I felt really empty, and her place felt so big,” she said. “But the only thing that I could do was do my best. I don’t want to do anything new just because I’m a solo [singer] now, but I do want to try the things I can within the boundaries of BOL4 and make sure that the band’s music and genre is refreshing.”

Ahn finished the showcase by thanking medical workers and everyone else working to fight the coronavirus, and she wished everyone good health until they met again.

“I’m always so grateful that there are people who love our music. They’re the reason I can do this. I’m thankful for all the fans who supported me through making this album and I want to pay them back in any way I can,” she said.