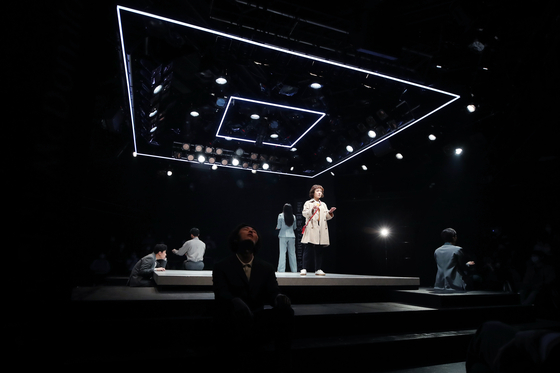 The play ’Table for One“ tells the story of In-yong, center, a newbie worker. She is bullied by her co-workers and is left to eat alone. She eventually enrolls at an institute to learn how to eat alone. [YONHAP]

TABLE FOR ONE
Doosan Art Center, Space111
Through May 23: Many people eat alone, whether they want to or not, and the production “Table for One” is all about those who don’t have companions for their meals. The play is based on a novel written by Yoon Ko-eun with the same title.
The story revolves around In-yong. She has only been working for nine months. She tries to adapt to her new life but only finds herself being bullied by her co-workers for no reason. Nobody wants to eat lunch with In-yong, and she is left to eat alone everyday.
Feeling stressed out, In-yong eventually enrolls at a private institute, which advertises itself as a place where people can learn how to skillfully eat alone.
There, she learns techniques on eating all types of food from a bowl of pasta to a full-course meal. The only thing she doesn’t learn is how to enjoy barbecue by herself.
One day, she comes across a master of eating alone who changes everything.
The play starts at 8 p.m. during weekdays and 3 p.m. on weekends. There are no shows on Mondays. On May 20, there will be two shows at 4 p.m. and 8 p.m.
Tickets are priced from 10,000 won ($8.20) to 35,000 won.
Jongno 5-ga station, line No.1, exit 1. 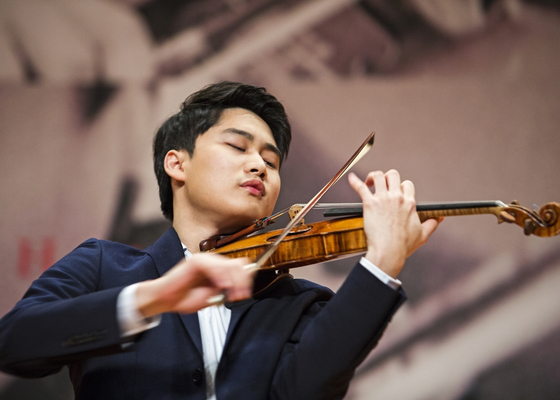 PRAY FOR YOU
Seoul Arts Center, Concert Hall
May 22: Violist Richard Yongjae O’Neill’s recital “French Music Night” has been renamed “Pray for You” and its program will be changed in accordance with the new title.
The violist was supposed to hold a recital in collaboration with flutist Philipp Jundt and harpist Emmanuel Ceysson, but the coronavirus outbreak made it impossible for the foreign performers to come to Seoul.
According to Creida Music and Artists, an organizer of the concert, O’Neill wanted to keep a promise he made with audiences, so he decided to carry on the concert and will instead perform with violinist Yang In-mo, above, who is staying in Korea after all of his overseas schedules were called off.
Yang won the International Violin Competition Premio Paganini in 2015 and became the first Korean to win the prestigious competition at the age of 21.
Along with O’Neill and Yang, Russian pianist Ilya Rashkovskiy will join, too.
The three will perform Dvorak’s four romantic pieces, Schubert’s “The Linden Tree” and Caccini’s “Ave Maria.”
Apart from pursuing his solo career, O’Neill is actively involved in performing as a member of the Korean classical group Ensemble Ditto. He formed the group, which consists of young performers who play viola, violin, cello, clarinet and piano, in 2007.
The ensemble enjoys as much popularity as some K-pop boy bands.
The concert starts at 8 p.m.
Tickets are priced from 30,000 won to 100,000 won.
Nambu Bus Terminal Station, line No. 3, exit 5. 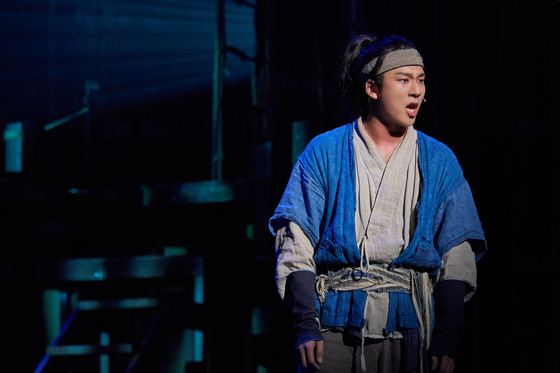 SWAG AGE: SHOUT OUT JOSEON!
Hongik Daehangno Art Center, Grand Theater
Through May 24: Set in the Joseon Dynasty (1392-1910), “Swag Age: Shout Out Joseon!” revolves around a sijo (traditional poetic format) competition of denizens.
The musical is based on the premise that sijo is part of the country’s ideology, but people are not allowed to write or recite sijo. But for the first time in 15 years, the ban has been lifted. To commemorate the return of sijo, a nationwide competition is held, and people relieve their pent-up desire for freedom and equality through their own poems.
Although actors are clad in shaggy hanbok (traditional Korean clothing), the musical blends gukak (traditional Korean music) with hip-hop and a traditional mask dance originated from the Bongsan region of Hwanghae Province in North Korea with street dance of today.
Due to the coronavirus outbreak, audiences are required to wear masks throughout the show.
The musical starts at 8 p.m. on weekdays and 2 p.m. and 6:30 p.m. on weekends and national holidays. There are no shows on Mondays.
Ticket prices range from 66,000 won to 88,000 won.
Hyehwa Station, line No. 4, exit 3 or Jongno 5-ga Station, line No. 1, exit 2.

ONEGIN
Chungmu Arts Center, Grand Theater
July 18 - 26: Universal Ballet Company presents “Onegin.” The ballet is based on Alexander Pushkin’s novel “Eugene Onegin,” and it was choreographed by famed ballet dancer and choreographer John Cranko for the Stuttgart Ballet in 1965. Kurt-Heinz Stolze rearranged the music of Pyotr Ilyich Tchaikovsky.
“Onegin” was premiered on home soil in 2009 by Universal Ballet Company.
Unlike other famous ballet pieces such as “Swan Lake” and “The Sleeping Beauty” with fairy-tale love stories, “Onegin” depicts the realistic and entangled relationship of a man and a woman.
In order to maximize feelings of the protagonists, Cranko reportedly used repetitive jumps and lifts throughout the story.
The performance starts at 7 p.m. on July 18. The ballet starts at 2 p.m. on July 19, 25 and 26 and at 8 p.m. on July 23 and 24.
Tickets range from 40,000 won to 100,000 won.
Dongdaemun History & Culture Park Station, line No. 2, 4 or 5, exit 2.


42ND STREET
Charlotte Theater
June 20 – Aug. 23: “42nd Street,” one of the world’s longest-running Broadway shows, is coming to Seoul. Set in 1933, the musical depicts the life of Peggy Sawyer, who dreams of becoming a dancer on Broadway.
The entire performing industry is hit hard by an ongoing recession, but an audition for musical “Pretty Lady” has opened up and Peggy wants to try her luck.
Meanwhile, veteran stage star Dorothy Brock gets cast for the lead role of “Pretty Lady” as her wealthy lover Abner Dillon invests a lump sum of money on the musical.
Peggy secured a spot as one of the chorus singers in the musical, but she is fired for accidentally breaking Dorothy’s ankle during a rehearsal. She is eventually fired two days before the musical begins.
With the absence of the lead actor, the musical is about to close, but other chorus girls suggest Peggy may play the role of Dorothy.
Actors Song Il-kook, Lee Jong-hyuk and Yang Jun-mo are cast for the role of Julian Marsh, the producer for “Pretty Lady,” while veteran musical actors Choi Jung-won, Jeong Young-ju and Bae Hae-seon will play the role of Dorothy Brock.
The musical starts at 8 p.m. on Tuesdays, Wednesdays and Thursdays; 3 p.m. and 8p.m. on Fridays; 2 p.m. and 6:30 p.m. on Saturdays; and 2 p.m. on Sundays.
Tickets range from 60,000 won to 140,000 won.
Jamsil Station, line No. 2, exit 3.