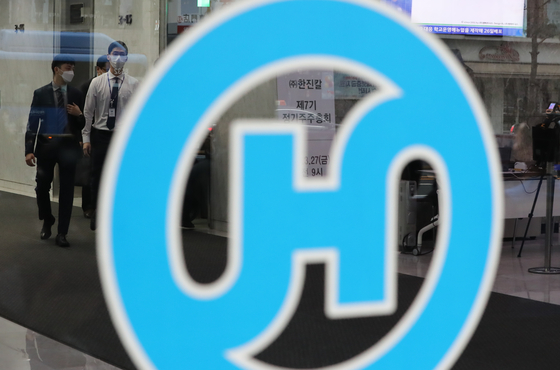 
Hanjin KAL announced Thursday it will invest up to 300 billion won ($244 million) to purchase a portion of the 1 trillion won in new stock Korean Air Lines will issue later this year, in a bid to maintain its current level of control over the cash-strapped airline.


The announcement comes a day after the national carrier announced plans to issue the new shares in July. Many airlines are being pushed to the brink of insolvency as the coronavirus pandemic continues to ravage the travel industry.

Hanjin KAL holds a 29.96 percent stake in the national carrier.

To secure the funds necessary to purchase the airline’s new shares, Hanjin KAL said it will sell some of its assets and take out mortgage loans. The details are still being worked out, according to a company spokesperson.

As of late last year, Hanjin KAL had less than 200 billion won in cash and cash equivalents. But apart from the airline, Hanjin KAL also owns shares in other Hanjin affiliates, including Jungseok Enterprise.

Under the airline's plan to issue new stock, almost 80 million shares of Korean Air Lines will be sold for about 12,600 won each. The new stock price will be finalized July 6, and sale will begin July 9.

Korean Air Lines on Wednesday announced it will issue 300 billion won in convertible bonds as part of its recovery plan, initiated after the pandemic left 90 percent of international flights canceled.

Some analysts argue the infusion of cash will still be insufficient in the long term.

“The short-run liquidity crisis is expected to be partially solved through the issuance of new stocks and convertible bonds,” wrote analyst Kim Pyeong-mo from DB Financial Investment in a report Thursday. “But considering the number of newly-confirmed coronavirus patients in the key countries, normalization of international transport will become possible in the fourth quarter at the earliest."

Kim is projecting a 409.7 billion won operating loss for the company this year.

“We believe Korean Air Lines will report 1.28 trillion won in net loss this year," wrote Kim Yu-hyuk, an analyst for Hanwha Investment & Securities, in a report on Thursday. "Its debt ratio was projected to reach 1,700 percent due to the decreased capital but is expected to be lowered to 896 percent once the issuance of the new stocks and convertible bonds is complete.”

Korean Air Lines is expected to announce its first-quarter earnings on May 15.