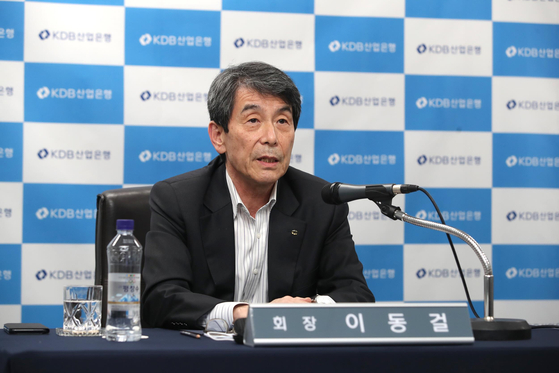 
Korea Development Bank (KDB) insists that it is not investing in Hanjin KAL to support the interests of Chairman Cho Won-tae, and added that it will take action against those who suggest otherwise.


KDB “will firmly respond to any groundless doubts or accusations,” the state-owned bank said in a press release on Monday amid the mounting criticism over its decision to invest in Hanjin KAL to help Korean Air Lines acquire Asiana Airlines.

Cho and allies control fewer than half, and possibly fewer than a third, of the shares of Hanjin KAL, which itself owns 29.27 percent of Korean Air Lines. If KDB, which will own 10.66 percent of Hanjin KAL after the transaction, sides with Cho, that could allow him to outvote shareholders seeking to oust him.

In an effort to justify its role in the acquisition, the bank says it is investing 800 billion won ($720 million) in Hanjin KAL so it can oversee the restructuring of the airline industry, which is struggling for survival.

“The restructuring not only includes two full-service carriers but also their low-cost carriers and aircraft ground handling operators, and, therefore, Hanjin KAL plays a central role in integrating their functions as a holding company,” said KDB in a statement.

In the transaction announced Nov. 16, KDB will invest in Hanjin KAL, which will buy shares of Korean Air Lines, which will in turn acquire a controlling interest in Asiana Airlines. The budget airlines will be rolled up into a single low-cost carrier.

“Since specific methods and details on the operational structure will be determined in the future while building plans for post-merger integration, KDB has to invest in Hanjin KAL to play the role that had been anticipated regardless of the methods of restructuring,” KDB added.

Along with the Export-Import Bank of Korea (Eximbank), KDB has provided 2.9 trillion won of funding to Korean Air Lines and Asiana Airlines this year.

Korea Corporate Governance Improvement (KCGI), Hanjin KAL’s largest shareholder, objects to the Asiana takeover on the grounds that the ownership stakes of existing shareholders will be diluted. It said the acquisition is just an attempt to help Cho Won-tae maintain control over Hanjin KAL and Korean Air Lines.

It filed for an injunction against the issuance of new shares to KDB. The hearing is scheduled to take place at Seoul Central District Court on Wednesday.