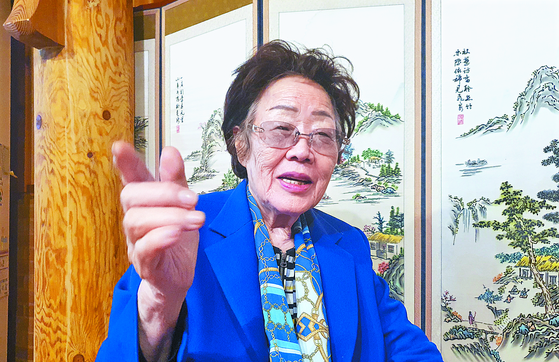 Lee Yong-soo, a 91-year-old survivor of Japanese wartimesexual slavery, sits for an interview with the Monthly JoongAng on Wednesday inDaegu. [MUN SANG-DEOK]


Lee Yong-soo, a 91-year-old survivor of Japanese wartime sexual slavery, in an interview Wednesday said that she will “no longer be used.”

For the past week, Lee stayed clear of the spotlight following a press conference on May 7 in Daegu in which she questioned the financial transparency and integrity of a civic group dedicated to resolving the "comfort women" issue, the Korean Council for Justice and Remembrance for the Issues of Military Sexual Slavery by Japan. Specifically, she accused it of misusing donations and disassociated herself from Yoon Mee-hyang, a lawmaker-elect and former head of the group, also known as the Korean Council.

On Wednesday, Lee, a longtime activist for the cause of the young girls and women forced into sexual slavery during World War II, told the Monthly JoongAng that Yoon “should tell the truth even now,” adding that she has “no conscience.”

“I said what I had to say, and I will no longer be used,” said Lee. The full three-hour interview will be featured in the June edition of the magazine, an affiliate of the Korea JoongAng Daily.

On Dec. 28, 2015, a controversial deal aimed at “finally and irreversibly” resolving the wartime sexual slavery issue was struck between Japan’s current Shinzo Abe administration and the Park Geun-hye government, which included an apology from Tokyo and a 1 billion yen ($9.34 million) fund for the victims, known as comfort women. Some victims and civic groups immediately criticized the agreement for its failure to recognize Japan’s legal responsibility for its war crimes and said they were kept in the dark about the deal. The Moon Jae-in administration has since called the agreement “flawed” and scrapped the Tokyo-funded Reconciliation and Healing Foundation, but has stopped short of overturning the deal.

In the May 7 press conference, Lee said the Korean Council has raised massive amounts for decades but spent little on the victims. Lee alleged that the government had informed Yoon in advance about the details of the 2015 deal, including that Japan had agreed to pay 1 billion yen, but kept survivors in the dark.

Yoon, who was elected a proportional lawmaker from the Democratic Party’s satellite Citizen Party last month, has rebutted the allegations and even questioned Lee’s memory. In the interview, however, Lee recollected in great detail her activities supporting the cause of the comfort women, the 2015 deal and even her encounters as a 13-year-old girl.

Lee said she doesn’t like being described by the term “sex slave,” despite "comfort women" being a euphemistic term, because she said it makes her feel “dirty and embarrassed.”

The civic group was first established in 1990 as the Korean Council for the Women Drafted for Military Sexual Slavery by Japan and has been a leading advocate of comfort women survivors. It organizes the weekly demonstration in front of the Japanese Embassy every Wednesday since 1992.

The following are edited excerpts of the interview with Lee.


Have you seen media reports of what's going on?
When I saw [the media reports], there were many inaccurate things. I never disappeared. I have nothing to be embarrassed about, so why would I hide? Because I did nothing dishonest, I am even more confident. I worried for one year ahead of the press conference. During that time, I had a lot of inner struggle and visited temples here and there to settle my mind. I have done nothing wrong and am alone, so I can fight back confidently.


Do you mean to say you were holding back and finally held the press conference?
Rather than holding back, I have been constantly active over 30 years [in the movement to support the victims of wartime sexual slavery]. Yoon Mee-hyang also worked hard. I recognize that she worked hard.


Then do you believe there is a problem with lawmaker-elect Yoon?
Looking back, there were many things wrong. Even things I didn’t know. For her to be a representative, she must tell the truth now. If she continues to make excuses, [the lies] will be revealed. Even if the president gives her a position, even if she is given a National Assembly position, [she should have refused it] because she said she will resolve this [the comfort women] issue. But rather, she pushed all that aside for her selfish interests and desires. If you've seen one, you've seen 10, [as the Korean saying goes], and this is not right. Didn’t she take the money?


What problems did you want to raise?
Why did she sell out the comfort women issue as she pleased? This can count as defamation and being used. Also, why are only the survivors [living in the facility run by the Korean Council] considered the only victims? The [donations] are for elderly survivors across the nation, but why are just the ones living there considered victims? This one thing says it all.


When did you learn about the 2015 comfort women deal?
Through the television on Dec. 28. As is the case with the Ministry of Foreign Affairs, if the [deal] was for the victims, they should have informed the victims. But I was utterly deceived. I only received a letter from [then-]Foreign Minister Yun Byung-se on Jan. 29, [2016].


What about allegations that Yoon dissuaded victims from accepting the settlement from the foundation established with the 1 billion yen paid by Japan ?
When I visited the House of Sharing [another facility for comfort women survivors in Gyeonggi], one grandmother told me to come over to her and said, "I have cancer so I am going to accept the money and give it to my son." She said she was definitely going to accept it.


The Korean Council said that it raised public donations and provided 100 million won ($81,500) to the survivors who did not receive the money from the Tokyo-funded foundation.
I received that. However, there were cases in which victims who were confused or suffering from Alzheimer's sometimes just left it to their guardian and left the world like that.


Why raise the issue now?
I believe that you shouldn’t do what the victims do not desire. I think that the history museum should be expanded and an education facility should be made because it is important to teach accurate history. Even if one word is spoken, it is important to teach it correctly. Even if you show up at the [weekly Wednesday rallies], you don’t learn anything. Do people really know why we are [calling on Japan] to apologize and compensate?


You called for an end to the weekly Wednesday rallies in your press conference last week.
Students always show up rain or shine and make donations emptying out their bank accounts without any suspicions. I feel bad for those students. If [the Korean Council] receives money, then they should buy them some lunch before sending them back. The survivors feel bad, so we want to teach the students who show up accurate history, but [the Korean Council] is always too busy with their own management. The students have to learn accurate history. The students of the Republic of Korea are the owners of the Republic of Korea. I believe they will learn what is right and wrong through exchanges with Japanese students. The Korean Council published [comfort women] testimony collections since 1993, which sold for 6,500 won. I didn’t even know what a testimony collection was at that time.


Do you really plan on quitting the Wednesday rallies?
I really don’t have the energy anymore. Even if I go, I’m the only one left. What’s the point of holding a rally when there are no more victims? The students show up because there are victims, but I don’t want the students to suffer. I don’t want to use the money from their scant savings.


How do you feel right now?
At times, I think maybe I have lived too long, but when I think of Kim Hak-sun [the first woman to publicly testify in 1991, leading to widespread awareness of the issue], I think I, Lee Yong-soo, need to finish this, and I feel a bit better.


What does it mean to resolve what Kim Hak-sun started?
I don’t mean to end the movement. We cannot pardon Japan seeing the wrongdoings by [Japanese Prime Minister Shinzo] Abe. Prime Minister Abe has always lied... However, I believe that the method of the movement has to change. That is how our next generation can be confident when facing Japan. That is how I can confidently tell the victims who have parted from this world, "I finished what I had to do."


Do you want to meet Yoon in person to clear up any misunderstandings?
I don’t want reconciliation. I can’t do that. The council cannot be fixed. It has to be dissolved.