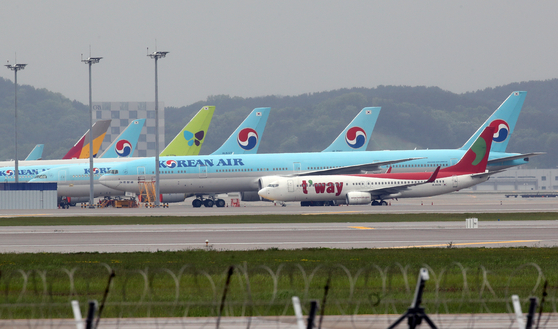 
As widely expected, airlines suffered badly in the first quarter as a result of the collapse in travel demand with the coronavirus pandemic. Losses were mitigated by an increase in demand for cargo shipments, but not a lot.


Full-service carriers suffered more than 20 percent declines in revenue in the first quarter and budget carriers up to a 50 percent dip.

The operating loss for the first quarter was only 56.6 billion won (compared to a 238.4 billion won profit a year earlier) because operating expenses were much lower with so many staff on unpaid leave and lower oil prices, according to Korean Air Lines in a statement Friday.

It was the first operating loss for the airline since the second quarter of 2015, when it reported a 19.56 billion won operating loss.

The national airline said the red ink is expected to continue in the second quarter. But it expects domestic travel demand to gradually recover centering on flights to Jeju Island as the number of coronavirus patients stabilize in Korea. It also predicted that restrictions on travel abroad will ease after May.

“We’re truly grateful for the support of the government and the state-run banks,” said Korean Air Lines President Woo Kee-hong in a statement. “Although the challenge has been inevitably caused by the external environment, we’ll do our best to work on turnaround measures and take it as an opportunity to reform.”

On the same day, Asiana Airlines reported expanded losses on decreased revenue in the first quarter for the same reason.

Asiana also saw demand for cargo shipments increase, particularly for IT products like semiconductors and computers.

Starting in June, Asiana Airlines plans to resume flights to the United States, Southeast Asia and China. 13 international flights will be resumed.

Asiana's budget subsidiary Air Busan’s net and operating incomes both went into the red on sales that declined almost 50 percent.

Another budget carrier, T’way Air, also went into the red.

“The first-quarter performance is just a signal of how bad it could be for airlines in the second quarter because demand for flights started plummeting in March,” said Prof. Choi Jeong-chul, who teaches at the Graduate School of Manufacturing Innovation at Inha University. “For airlines, spacing out passengers on flights for social distancing will help lift demand for international routes when they resume next month.”