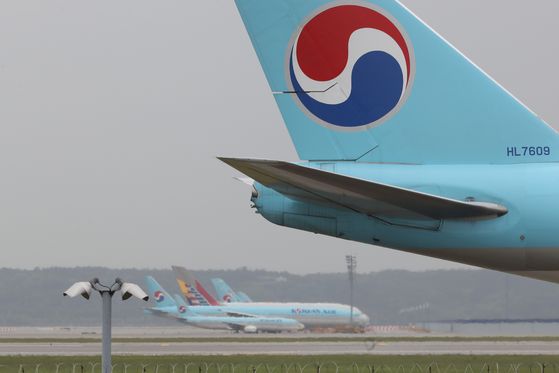 Full-service carriers are planning to expand international routes in July as travel demand gradually rebounds and government restrictions are eased.

As of June, it operates 19 international routes — just 26 percent of its normal 73 routes.

Asiana Airlines refused to reveal the demand for international routes in June, when it started expanding overseas flights.

“But the ease of entrance bans and the rise in demand were all taken into account before deciding to expand routes,” said Han Jae-min, a spokesperson for Asiana Airlines.

“The list is just a plan, and there is a possibility it could change depending on how situations develop,” said Hong Seok-yun, a spokesperson for Korean Air Lines. “For instance, we were planning to expand routes flying to China in June, but couldn’t due to restrictions from the Chinese government.”

Hong added that the airline could fly cargo on a passenger carrier on the expanded routes if there is demand.

On June 11, Korean Air Lines flew its first passenger aircraft carrying cargo seat bags, which are designed to maximize available space for cargo on a passenger carrier. They are placed in passenger seats.

The new cargo storage solution is part of the airline’s effort to make full use of its assets. Many planes have been idle during the coronavirus pandemic.

“Incheon International Airport, which handled 72 million people in 2019, handled 10.59 million people from January through May,” said Prof. Choi Jeong-chul, who teaches at the Graduate School of Manufacturing Innovation at Inha University. “If the trend continues, it will be difficult [for the airport] to even see 20 million people in 2020, or could process 30 million in the year if the demand for international travel recovers to 3 million people per month in the second half of the year.”

“Demand for passenger flights has been seriously damaged from Covid-19, but cargo demand hasn’t been hit that hard because the physical flow [of trade] among countries that manufacture components and those that make finalized goods continued regardless of the virus,” said Choi.

Incheon International Airport handled a total of 1.27 million tons of cargo from January through May, compared to 3.77 million tons last year. If the trend continues, the airport is projected to handle 2.8 million tons this year, according to Choi.