The two largest parties are taking steps to merge with their satellite offshoots to bring in proportional lawmakers elected through the April 15 general elections.

The ruling Democratic Party (DP) and its satellite Citizen Party (CP) finalized their merger deal on Wednesday. Lawmakers-elect of the CP will join the DP, according to their arrangement, bringing up the number of the ruling party’s seats to 177 in the 300-member National Assembly. 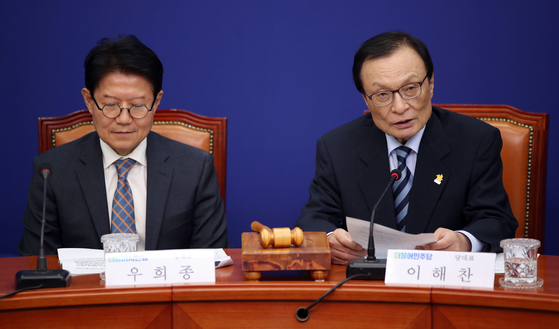 Last month, the DP won 163 district seats and the CP won 17 proportional seats. But only 14 lawmakers-elect of the CP will participate in the merger. Two CP lawmakers-elect said they would go back to their original parties. The CP also expelled a lawmaker-elect for her allegations of corruption. She remains an independent lawmaker-elect as of Friday.

Lawmaker-elect Choe Kang-wook, former presidential aide of the Moon Jae-in Blue House, was recently elected as its chairman. Choe, who served as presidential secretary for civil service discipline from September 2018 till March this year, is currently standing trial on charges of being part of former Justice Minister Cho Kuk’s son’s admissions frauds. 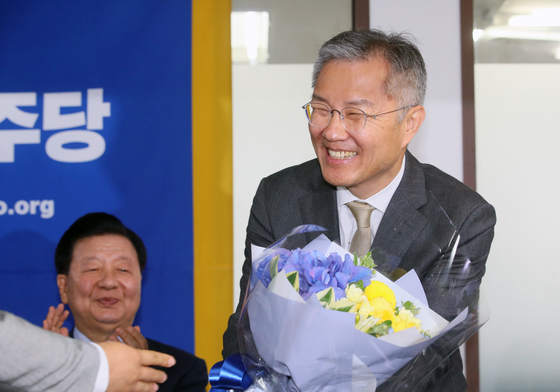 Lawmaker-elect Choe Kang-wook received a bouquet on Tuesday after he was elected the chairman of the Open Minjoo Party. [YONHAP]

“When the DP elects new leadership, we need to talk about a merger with the OMP,” Rep. Woo Sang-ho, who won his fourth victory last month, said in an interview with BBS Radio. “It is undesirable that parties from the same root remain divided.”

Woo said it is hard for DP Chairman Lee Hae-chan to reverse his public promise during the election campaign that the ruling party will not merge with the OMP over its controversies. “The merger, therefore, should be pushed forward after we elect a new leadership in August,” he said.

Woo’s remarks followed President Moon’s recent telephone call with Choe. Moon called Choe on Wednesday and congratulated him. “From the standpoint of a minority party, it is important to cooperate with other parties,” Moon was quoted as saying in the OMP press release. 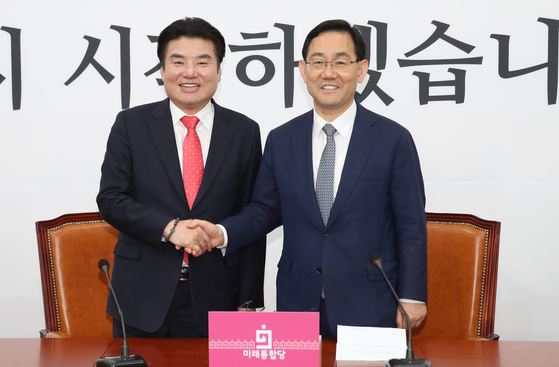 The merger will produce a conservative party with 103 lawmakers — 84 district representatives of the UFP and 19 proportional lawmakers of the FKP.

In an interview with MBC Radio, Won said it is desirable to complete the merger as soon as possible. “Preferably, it should be done before May 29,” he said, referring to the final date of his tenure as the FKP chairman.

Speculation still remains that the FKP, which has 19 lawmakers, will remain independent. If it recruits an independent lawmaker or forms an alliance with the People’s Party, which has three lawmakers, it can become a negotiation bloc of its own as 20 lawmakers are required to hold such status in the National Assembly.