The main opposition United Future Party (UFP) and its satellite Future Korea Party (FKP) will complete their merger by Friday to form a conservative party of 103 lawmakers.

The FKP held a meeting of its lawmakers and lawmakers-elect on Tuesday and approved a plan to merge with the UFP. In the April general elections, the UFP won 84 seats and the FKP won 19 in the 300-member National Assembly. 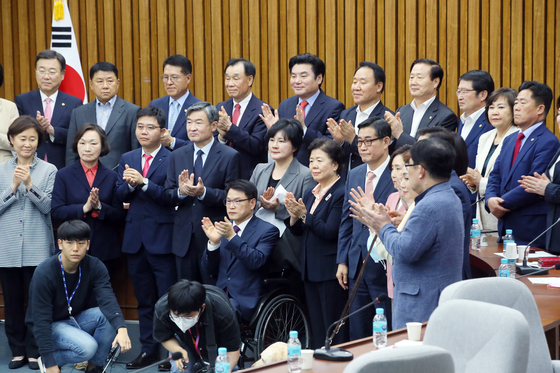 Future Korea Party members hold a meeting and approve a merger with the Unified Future Party on Tuesday. [YONHAP]

Although the FKP originally planned to remain independent and extend the tenure of its current leader Won Yoo-chul, the party members recently reversed course and decided to join the UFP.

The ruling Democratic Party (DP) already merged with its satellite Citizen Party earlier this month. The DP will control 177 seats in the upcoming legislature.

The UFP is scheduled to hold a meeting of national delegates on Wednesday to approve the merger plan. The two parties are scheduled to complete the merger by informing the National Election Commission on Friday. Lawmakers elected to the 21st National Assembly will begin their four-year terms on Saturday.

The name of the new party will likely be decided after an emergency leadership committee headed by Kim Chong-in begins its term, UFP Rep. Kim Sang-hoon said Monday. Kim is currently negotiating the merger with the FKP.

The interim leadership committee, which will oversee the largest opposition party through April 2021, will officially take charge on June 1.

On May 22, the UFP’s lawmakers-elect overwhelmingly approved a plan inviting Kim, the party's former chief campaign manager, to run the party as its interim chairman until the by-elections in April of next year. Floor leader Joo Ho-young paid a visit to Kim later that day to inform him of the party’s plan, and Kim accepted the offer.