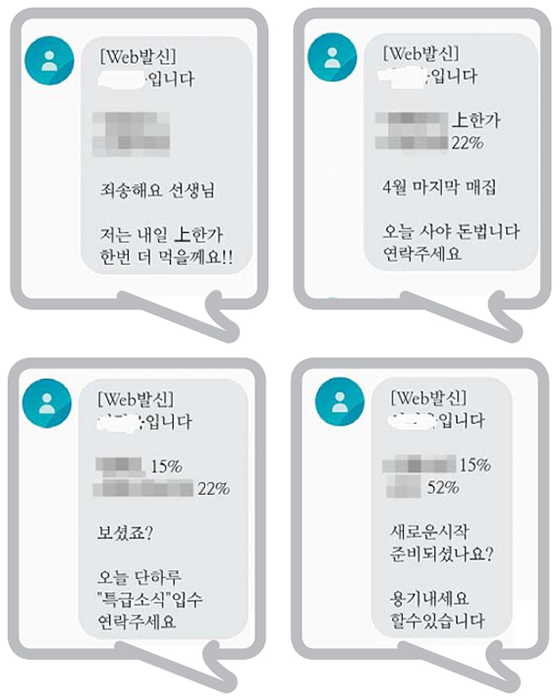 A text message recommending investors to buy certain stocks. They are usually sent after 6 p.m.


While local retail investors have been on a buying spree of Korean stocks since the coronavirus-induced downturn began, regulators warn that financial flimflam artists are also becoming more active.


The Korea Internet & Security Agency (KISA) said it has seen a rise in pump-and-dump schemes in the past two months, in which scammers reach out via text message to unwitting investors and try to convince them to engage in after-hours trading. The scam works by convincing enough victims to buy the same stock, artificially pushing up the price at the opening bell, so that the scammers can dump their own shares to turn a quick buck.

“Sorry sir, I am going to sell the stocks at the cap tomorrow. If you want to make money, you need to buy them today," wrote a scammer in one of the fraudulent text messages. "Give me a call.” 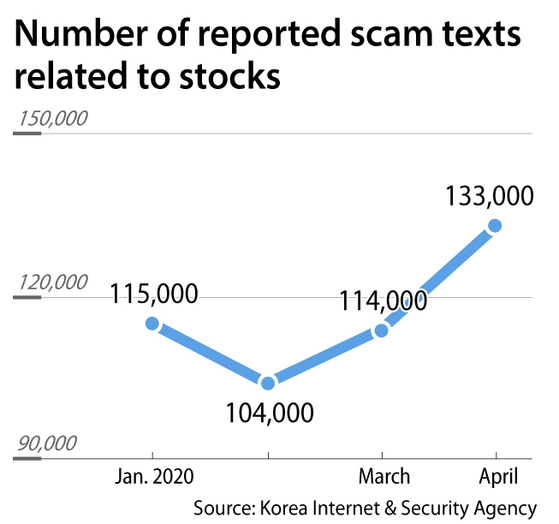 A total of 466,000 such fraudulent texts related to stocks have been reported from January through April this year, according to statistics from KISA. The actual number is likely much greater, with some estimates indicating that only 1 percent of cases are officially reported.

The buying spree from retail investors, dubbed the “Donghak Ant Revolution," may be presenting more opportunities for dump-and-pump operations.

Most of the messages reported contain investment information along with exaggerated numbers and predictions from self-proclaimed asset managers, according to the Korea Exchange. They may recommend that the person subscribe to paid chat rooms that claim to provide exclusive information on the stock market.

“It is widely known that most stocks recommended through scam texts are pump-and-dump schemes,” said an official from the Korea Exchange. "Scammers would buy certain stocks in bulk before they send texts to random people and sell them once the price increases."

The scammers typically send messages to investors recommending shares that have increased in price during the after-hours fixed-price trading that runs from 4 to 6 p.m. Some stocks experience price bumps in the after-hours market when positive news or earning results are released after the closing bell.

The stock price of such shares is highly likely to increase at the market’s open the next trading day, but they can also get a boost from retail investors who were motivated by scam texts to buy the stocks after the market close in the previous day.


Even if they don't get a bite, the swindlers can point to the jump in stock prices to bolster their case that their prediction was correct.

In one instance, a stock that was recommended by an apparent scammer at 7 p.m. last Wednesday rose by 12 percent right after Thursday's opening bell. But its price dropped continuously during market hours. The closing price eventually inched up by only 3 percent, meaning retail investors who bought the stock at the market’s open lost money.

The swindlers also attempt to make money by luring victims to sign up for paid memberships to “exclusive” stock market analysis chat rooms.

When the JoongAng Ilbo, an affiliate of the JoongAng Daily, responded to one such message, the sender recommended buying a one-year subscription to a chat room supposedly organized by a private investment group. The cost of the subscription would have been 6.5 million won ($5,300), a huge discount, according to the person, since the full price for the membership is usually set at 16 million won.

“We provide secret information much faster than the free texts so that investors can sell when the price spikes,” the person, who claimed to be a researcher for the investment group, said over the phone.

Some even set a target price and lure retail investors into impulsively buying certain stocks, lacing their pitch with promises of new business deals or a new merger or acquisition deals that will cause share prices to skyrocket.

The Financial Supervisory Service (FSS) warned that investments based on such texts can lead to potential losses for individual investors.

In April, when the spread of the coronavirus accelerated worldwide, there was a particularly high number of scams recommending companies that were developing vaccines and treatments for the coronavirus.

Some 13,000 scam texts were reported to the FSS in April alone for one company’s stock that the Korea Exchange suspected as a target of a pump-and-dump.

The Korea Exchange partnered with KISA in March to warn investors of shares that are mentioned often in scam texts. With the help of scam data provided by the agency, it shares a list of stocks that had huge trading fluctuations and were mentioned in scams multiple times during a short period.

Currently, 31 shares have been included in the exchange’s warnings list, which is available on its official website.