“We need to conduct a parliamentary investigation into the allegations as the public uproar is fierce,” Rep. Kim Sung-won, deputy floor leader of the UFP, said Tuesday. The UFP also formed an internal fact-finding task force to investigate a series of suspicions surrounding Yoon, a lawmaker-elect of the ruling Democratic Party (DP), and her civic group, the Korean Council for Justice and Remembrance for the Issues of Military Sexual Slavery by Japan. 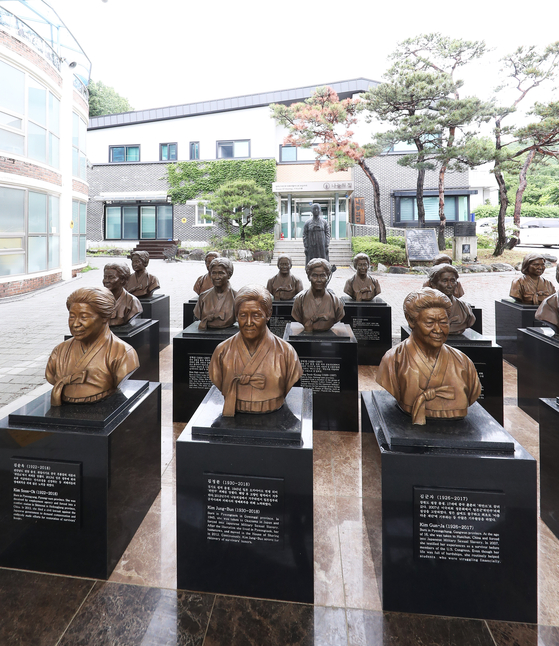 Busts of former ’comfort women“ victims who have passed away on display at the House of Sharing, a shelter for them in Gwangju, Gyeonggi. [YONHAP]

The scandal surrounding the activist-turned-politician started earlier this month with a bombshell revelation by Lee Yong-soo, a 91-year-old survivor of Japan’s wartime slavery. In a press conference on May 7, Lee said former comfort women have been politically exploited for decades by the Korean Council and Yoon, expressing skepticism about their financial transparency and integrity.

Media reports followed, questioning dubious accounting records and suspicious money management of the civic group. Yoon and the Korean Council were also accused of pressuring survivors to reject restitution offered by Japan, presumably to keep the matter unresolved in order to continue their activities.

The UFP said it wants to investigate suspicions that the Korean Council had committed accounting fraud and that Yoon and other members had misappropriated public donations and state subsidies for the civic group.

The party will likely propose the parliamentary investigation after the new National Assembly opens a session. Lawmakers elected last month will open the legislature on June 5, 2020.

“As the largest opposition party, we want to declare our commitment to conduct a parliamentary probe,” Bae Hyun-jin, a lawmaker-elect and spokeswoman of the UFP, said. “Actual work will start once the National Assembly starts.”

The UFP cannot launch a parliamentary probe alone, as it does not have a majority in the 300-member National Assembly. The UFP said it will negotiate with the DP to start the investigation as soon as the session starts.

The last time that the lawmakers approved a parliamentary probe was in November 2016 to investigate the abuse of power scandal by then-President Park Geun-hye and her confidante Choi Soon-sil.

The Future Korea Party (FKP), the UFP’s satellite party, also said Tuesday it has created a task force to lay bare the truth. “Instead of defending Yoon, the DP must also lead efforts to find the truth,” FKP Chairman Won Yoo-chul said, adding that the party’s task force team may merge with the fact-finding team of the UFP.

The conservative political parties apparently decided to go after Yoon as the public rage toward the activist-turned-lawmaker-elect snowballed. Before the weekend, the UFP refrained from attacking Yoon due to the political sensitivity of the matter.

“The time has come for us to act, rather than just waiting for media reports and issuing criticism,” said a lawmaker-elect of the FKP. “The party decided to form a fact-finding task force although the tenure of the lawmakers-elect has not even started, because we think this scandal has crossed the line.”

Cho Soo-jin, a lawmaker-elect and spokeswoman of the FKP, also demanded an apology from the DP on Tuesday for its ties to Yoon. According to Cho, the DP urged the public to send donations to Yoon’s personal bank account when a survivor, Kim Bok-dong, died in January last year.

“At the time, Rep. Kim Jung-ho posted a social network message that the DP was formally operating a fundraising campaign with its lawmakers,” Cho said. “He attached the personal bank account number of Yoon. You can easily suspect that using a personal bank account for raising funds for a nonprofit organization is intended for embezzlement, but the DP actually encouraged the public to send money.”

The DP has defended Yoon, but the mood is now changing. Asked about her fate on Tuesday, the DP’s new floor leader, Rep. Kim Tae-nyeon, refused to comment.

In an interview with CBS Radio, DP Rep. Song Young-gil blamed the media. “There is a need for transparency in keeping accounting records, but we must show respect to an activist who has dedicated her life to fight for the comfort women,” he said.

Another DP lawmaker, Park Yong-jin, however, was more critical. “Yoon and the Korean Council have done great work,” he told KBS Radio on Tuesday. “But the standard for accounting transparency is the same, whether it is Samsung or the Korea Kindergarten Association or the Korean Council. It must satisfy the people’s expectations and common sense.”

“Some were sympathetic toward Yoon at the beginning, but the magnitude and direction of the allegations are no longer something we can just disregard,” Park said, demanding a clear explanation from Yoon.

He also said the DP leadership must show a responsible attitude, since Yoon is a lawmaker-elect of the party. “The party must have a process to check on the suspicions,” Park said.

The DP recommended Yoon as a proportional lawmaker candidate to its satellite party for the April general elections. She won the election as a Citizen Party candidate and became a lawmaker-elect of the DP after the two parties merged last week.

Lee Nak-yon, former prime minister and a DP lawmaker-elect, said Monday that he is taking the matter very seriously. “I am having in-depth discussions with the party [about her scandal],” Lee said.

Sources said DP Chairman Lee Hae-chan will announce the party’s position as early as Wednesday. Yoon and Lee Na-young, current head of the Korean Council, will also attend a press session hosted by the Seoul Foreign Correspondents' Club to explain their positions.