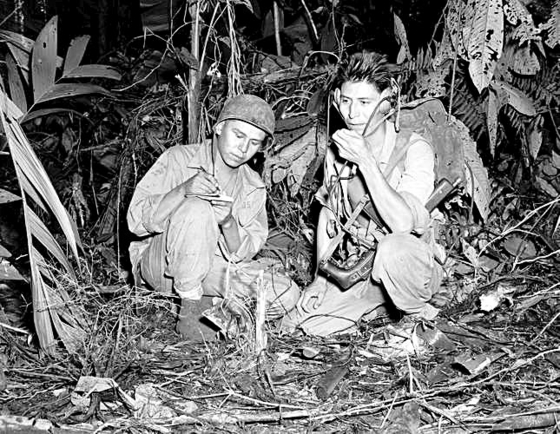 Drive to the east of Las Vegas in the United States and you encounter vast red lands. Colossal sandstones across the horizon are breathtaking. It is Monument Valley, familiar as the setting of old Western movies such as “Stagecoach” (1939), “The Searchers” (1956) and “Once Upon a Time in the West” (1968).

Tanks were called “turtles” in the Navajo language, bombers were “pregnant birds” and machine guns were “sewing machines.” After the Navajo codes were used, Japanese forces could not decode U.S. military communications. In 2002, John Woo made a movie titled “Windtalkers” on the subject.

The Navajo Nation has relations to Korea too. More than 800 Navajo soldiers, including the last original code talker Chester Nez (1921-2014), fought in the Korean War and shed their sacred blood for Koreans.

The 70th Anniversary of the Korean War Commemoration Committee, a joint civilian-government group, has decided to send 10,000 face masks and hand sanitizers to the Navajo veterans who joined in the Korean War.

It is a small gift, but the timing is right. A recent report shows that the Navajo Nation is the area with the highest per capita Covid-19 infection rate in the United States. Those receiving the assistance would welcome it as rain at the right timing. I hope the sincere appreciation for their service can be conveyed.