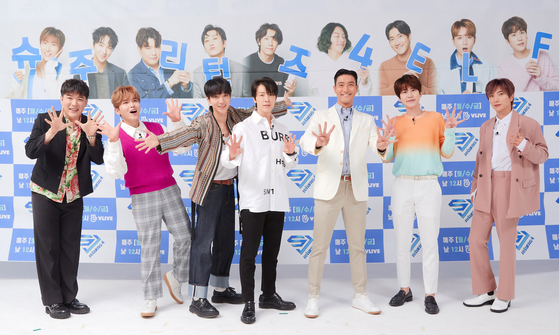 
"SJ Returns," a reality show following the everyday life of K-pop group Super Junior, kicked off its fourth season on May 18. In a live online press conference on Friday, Super Junior members introduced the new season and said that Ryeowook and Kyuhyun, who were absent in the previous season as they did their mandatory military service, are back, “adding more fun to the program.”


Kim Soo-hyun, the producer of the program and Super Junior members Leeteuk, Shindong, Donghae, Siwon, Yesung, Ryeowook and Kyuhyun attended the online conference and talked about how different the new season is to the previous ones. Eunhyuk and Heechul could not attend the event due to other commitments, said the group’s agency, SM Entertainment.

“I decided not to think about how to present myself in the program,” said Shindong, adding that "SJ Returns" tends to become more and more real and genuine every season.

“We are very true to ourselves [in this season] I think,” said Siwon. “Fans will be able to see even our innermost feelings.”

The program, which was launched in 2017 to celebrate the group’s 15-year anniversary, is aired on Naver TV every Monday, Wednesday and Friday at noon.

Meanwhile, Super Junior’s sub unit Super Junior-K.R.Y., composed of members Kyuhyun, Ryeowook and Yesung, disclosed the track list of its first mini-album on Friday. The mini-album is composed of six songs, and its title track is “When We Were Us.” The album will be released both online and offline at 6 p.m. on June 8.