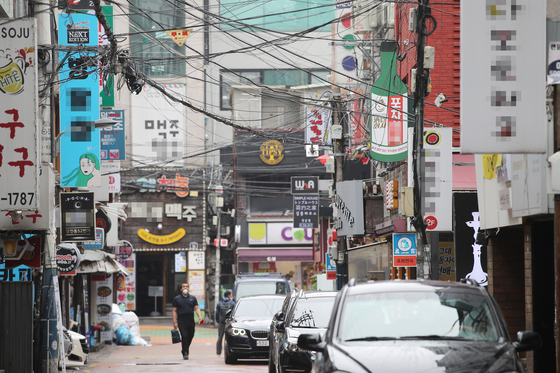 Alcoholic establishments newly classified as "high-risk" by the government on Friday line a street in Sinchon-dong, western Seoul. [YONHAP]


Sporadic infections in a cluster that began in Itaewon earlier this month continue to be detected, health officials warned, as Korea reported 20 new coronavirus cases on Friday.

According to the Korea Centers for Disease Control and Prevention (KCDC), 11 of the new cases occurred domestically, of which eight were linked back to infections at nightclubs in Itaewon-dong, central Seoul.

The other nine cases had foreign origins, officials said, and seven of those were discovered at airport testing facilities.

That brought the total number of infections in Korea to 11,142. No new fatalities were reported, leaving the country’s death toll at 264.

A total of 215 infections had been traced to the Itaewon cluster by Friday at noon, said Vice Health Minister Kim Gang-lip. More than 77,000 people linked to the cluster have been tested.

“Based on the situation so far, facilities like noraebang [singing rooms], hagwon [cram schools], internet cafes and bars have yielded a high proportion of patients relative to the sizes of such establishments,” Kim said.

“By contrast, infections at medical facilities like the Samsung Medical Center or the Kangnam General Hospital in Yongin have not produced mass infections.”

The recent upsurge in infections from clubs in Itaewon prompted the government Friday to expand the criteria of “high-risk establishments” to include noraebang as well as certain types of alcohol-serving businesses that were previously classified as regular restaurants.

The government’s Central Disaster and Safety Countermeasure Headquarters, headed by KCDC Director Jung Eun-kyeong, proposed a new method to classify businesses for their risk of infections based on how confined their spaces are as well as the average number of patrons they serve.

One type of establishment newly elevated to high-risk status are what is known as "hunting pocha," or places that appear similar to regular restaurants but which cater to patrons looking for random hookups, referred to as “hunting.” Another is the "gamseong," or emotion, bar, which look like ordinary bars but typically have spaces similar to nightclubs where patrons can dance.

Based on the new designations, both types of businesses must now check visitors’ temperatures and record their names and phone numbers in case an infection occurs. Workers at these businesses must wear face masks at all times and regularly disinfect areas used by patrons.

Noraebang, including variants known as coin noraebang where one or two patrons sing in booth-type rooms, must now disinfect each room after use by patrons and wait 30 minutes before allowing new customers to use each room.

If these establishments fail to follow the disease prevention guidelines, the government can charge owners as well as customers fines up to 3 million won ($2,400), according to health officials.

“We plan to [keep these measures in place] as long as the government’s health alert for the coronavirus outbreak remains at orange or red,” Kim said.

Though they have also been hubs of cluster infections, cram schools and religious establishments have not been subject to an escalated classification.

“It is difficult for us to make perfect assessments [on the risks faced by] each individual establishment,” Kim said. “The classifications of ‘high-risk’ just mean that these facilities must be more thorough in following health guidelines.”