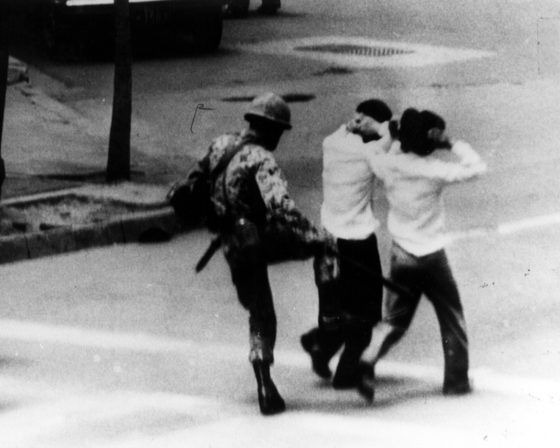 by KANG KI-HEON
The author is an industry 1 team reporter of the JoongAng Ilbo.


My ethics teacher looked serious one day in May 1996, when the season was changing from late spring to early summer. He began the class by saying, “I was a high school student just like you … When gunshots became clear at night, I hid in a small room, with windows covered with blankets.” He ended the class by saying, “My mother discouraged me from going outside even in broad daylight.”

As my memories are fading, I only remember the story in general. But the teacher speaking with his hands tightly holding onto the desk remains clear in my memory like a photograph.

I cannot presume why he talked about his dark memories from 16 years earlier. Perhaps he wanted to hold on to his fading memories. As an economic boom allowed people to live comfortably, people’s memories were getting blurry at the time. The May 18 Special Act was passed in December 1995, but there was no room for holding onto painful memories.

I am reminded of the teacher in May because he confessed that someone close to him was killed by the martial law army. It was very shocking for me.

The textbook reflecting the fifth and sixth curriculum only explained the May 18 Democratic Uprising in a few sentences. There were no statistics of victims or dates for the events.

All I learned about May 18 was a dry sentence, which read “a clash between citizens and suppressing forces. In the process, shockingly, a number of innocent citizens were killed.”

In my memory, my teacher 24 years ago was not angry about what happened in Gwangju in May 1980. He did not show any tears. He only shared the raw memories with his students. But he must have plucked up the courage to discuss the subject on that day in May 24 years ago. Some facts take determination to bring them up. It must have been his way of cherishing the memories of the victims. Has he gotten over the trauma?

May is here again. A few more bills have been enacted and several presidents have now attended the memorial ceremony. But not much has changed. Truth and lies clashed again this year too. The lies that are covered with superficial arguments attract people’s attention. On the other side is the truth with resignation and sorrow. It is the time to search for a national consensus.

A coffin with windows (KOR)