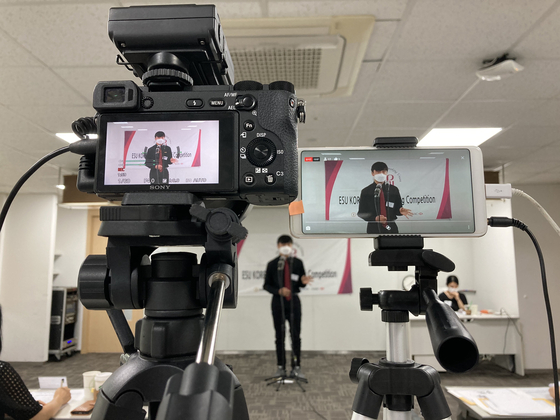 The winners of the 19th English-Speaking Union (ESU) Korea Public Speaking Competition were selected Wednesday after a nearly seven-month delay due to the coronavirus pandemic.

The contest, normally held twice a year by the Korea JoongAng Daily in a large auditorium, was originally scheduled for February, but was postponed in order to prevent possible transmission of the virus.

A total of 120 students were narrowed down from some 600 who signed up for the 19th ESU competition, sponsored this year by HSBC Korea and Incheon National University. There were four different categories based on the students’ grade level — elementary lower-level from grades 1 to 3, elementary upper-level from grades 4 to 6 and middle school and high school — with 30 finalists chosen for each.

The finalists were called into the Korea JoongAng Daily’s office in Jung District, central Seoul, over four days last month on staggered schedules, where they gave five-minute English speeches in front of a panel of judges.

All students, judges and staff were strictly required to keep a safe distance from one another and wear a face mask at all times.

The Gold Prize was awarded to Shin A-rim from Yongin Hankuk Academy of Foreign Studies, Kim Min-seong from Daebang Middle School, Park Ju-na from Korea International School and No Gyu-min from Chadwick International.