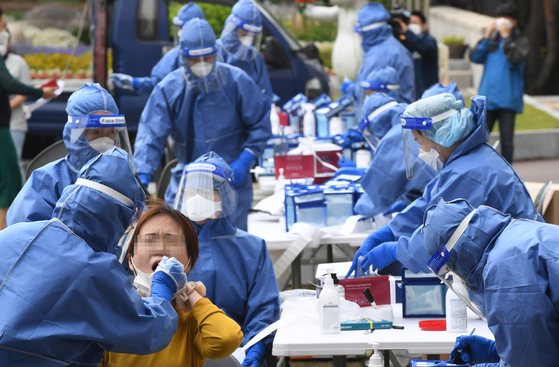 Officials at the Bupyeong District Office in Incheon get tested for the coronavirus Tuesday at a makeshift testing center on the office's front yard. The district office closed in the morning after two infections were detected among its employees. [NEWS1]

New coronavirus cases linked to several Protestant churches in the Seoul metropolitan area continued to grow Tuesday, as the third batch of students across the nation prepared to return to school for the first time since the coronavirus outbreak.

The Korea Centers for Disease Control and Prevention (KCDC) announced Tuesday morning that 38 new cases were detected across the nation Monday, three more than were reported Sunday.

Only two of Monday’s cases were imported and the rest were all from the Seoul metropolitan area — 13 in Seoul, 15 in the surrounding province of Gyeonggi and eight in Incheon. One case was imported from the Americas and the other was from Kuwait.

By Monday at midnight, 272 people had died, up by one from the previous day, while 10,446 people have been declared fully recovered, up by 24.

Among Monday’s 36 domestic cases, 22 were linked to a cluster of small new churches in the Seoul metropolitan area that apparently started from a 57-year-old female pastor in Incheon. A total of 45 people connected to 23 different churches in Seoul, Incheon and Gyeonggi have been diagnosed with Covid-19 so far in the cluster, the KCDC said, 30 of whom live in Incheon, nine in Seoul and six in Gyeonggi.

As of Monday, KCDC had not referred to any patients or churches in Seoul as part of the cluster. But health officials said Tuesday that several new Covid-19 cases were found among residents and churches in Seoul on Monday, indicating that the cluster could grow bigger in the coming days as patients are discovered outside the Incheon and Gyeonggi area.

Health officials believe the 57-year-old female pastor, who was diagnosed with Covid-19 on Sunday after coming down with symptoms of the virus last Thursday, was the initial spreader of the disease. How she got infected in the first place remains unclear.

Ongoing contact tracing has revealed that the female pastor participated in several prayer meetings and revival services in four different churches from May 25 to 28 in and around Incheon, which were attended by many worshipers from other churches as well, leading the virus to spread in their local communities.

An official with the Korean central government’s Covid-19 command center said Tuesday that nearly 70 percent of infections coming from the church cluster were asymptomatic patients. Attendees have testified to singing hymns and praying without wearing a face mask on during the gatherings, the official said.

Another cluster of Covid-19 cases has been traced to a group of 25 people from 12 different churches in Gunpo and Anyang, Gyeonggi, who traveled to Jeju Island together late last month. The total infections stemming from the group rose to 15 cases Tuesday, up by nine from Monday. The latest cases were traced to colleagues of the group and other people they had close contact with.

Unlike the church cluster in Incheon, health officials don’t know who the initial spreader of the virus is for the Jeju Island tour group. 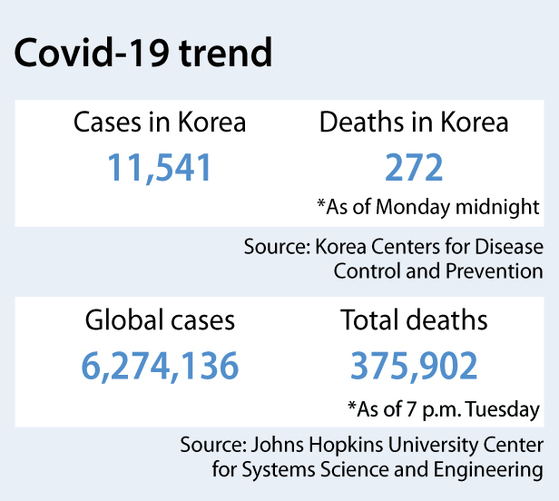 A much larger cluster that emerged last week from the Korean e-commerce company Coupang’s distribution center in Bucheon, Gyeonggi, reached 117 cases by Tuesday at noon, the KCDC said, an increase of five from a day earlier. All five new cases were among people who had contact with the Coupang workers.

As health authorities grapple with sporadic Covid-19 clusters popping up in the Seoul metropolitan area, many schools in the region on Tuesday announced plans not to open the next day, when the third batch of students — third, fourth, eighth and 10th graders — were scheduled to return to school for the first time since the pandemic began.

The Ministry of Education said at least 534 schools had informed the government as of Tuesday at 10 a.m. not to open Wednesday — 99 percent of which are located in either Seoul, Incheon or Gyeonggi.