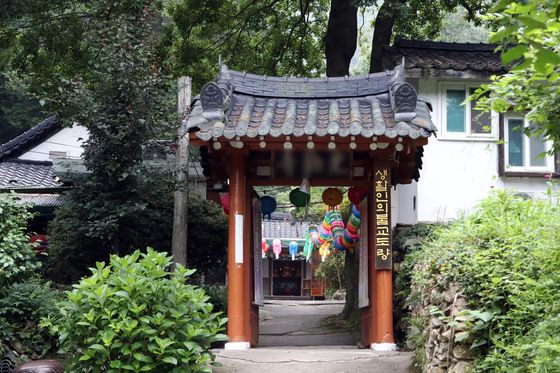 At least 49 coronavirus infections in Gwangju appear to be linked to the city’s Gwangreuk Temple, pictured above. [YONHAP]

The vast majority of those cases were connected to a mushrooming cluster traced to a Buddhist temple in the city, located 167 miles south of Seoul. At least 49 cases have been associated with the cluster at Gwangreuk Temple since last Saturday, when the first patient was diagnosed.

The cluster accounts for nearly 63 percent of the total number of coronavirus patients in Gwangju since the pandemic began, health officials said.

During a Thursday meeting at the country’s Covid-19 command center, Health Minister Park Neung-hoo warned that Gwangju could end up like Daegu. A massive cluster that emerged in mid-February from the Daegu chapter of the Shincheonji Church of Jesus led to thousands of infections during the subsequent weeks.

“Looking back at our experience with Daegu,” Park said, “it only took us a week to get from 20 infections to over 200. We need to stem the spread [in Gwangju] right now.”

Nationwide, 54 new infections were detected Wednesday, according to data released Thursday morning by the Korea Centers for Disease Control and Prevention (KCDC). Of that figure, 44 people were locally infected, the highest in a week. Aside from the 22 cases in Daegu, 13 cases emerged in Seoul, five in Gyeonggi, two in South Chungcheong and one each in Daegu and Daejeon.

Ten cases were imported, including two each from Kazakhstan and Pakistan and one each from Uzbekistan, Iraq, Kuwait and Bangladesh. Two other cases were from the Americas.

By Wednesday at midnight, 282 people had died, the same as the previous day, while 11,684 people had been declared fully recovered, up by 71 from the day before. 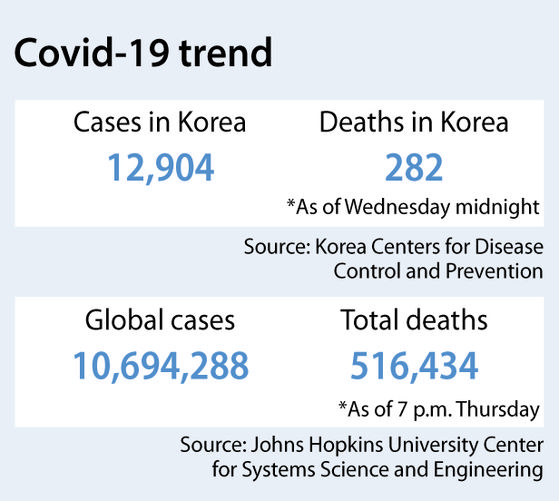 With coronavirus cases growing in Gwangju, all 438 schools in the city were forced to close Thursday and Friday, about a month after reopening for the first time since the pandemic erupted. Students went back to online learning while in-person classes were cancelled.

From next Monday through July 15, Gwangju’s education office said it will strongly recommend that elementary and middle schools cut classroom sizes to a third of their full capacity so that students can distance themselves. For high schools, officials will recommend cutting classroom sizes to two-thirds, given their busy schedules as they prepare for the national college entrance exam.

Gwangju’s government office has raised the city’s social distancing campaign level from one to two, modelling its response after the Covid-19 command center’s national three-tier social distancing plan announced late last month. While the triggers for a nationwide level two haven't been met, the local government said it will independently impose response measures in the city that go with the command center's second level, such as banning indoor meetings of 50 people or more and outdoor meetings of 100 people or more over the next two weeks.

Public libraries and museums will be shut during this period, and high-risk businesses such as indoor gyms, clubs, internet cafés and booth-type singing rooms (noraebang) will be banned from operating. Violators will be fined by up to 3 million won ($2,500), the city warned.

No new infections have been discovered among students in Daejeon as of press time Thursday after four tested positive earlier this week.