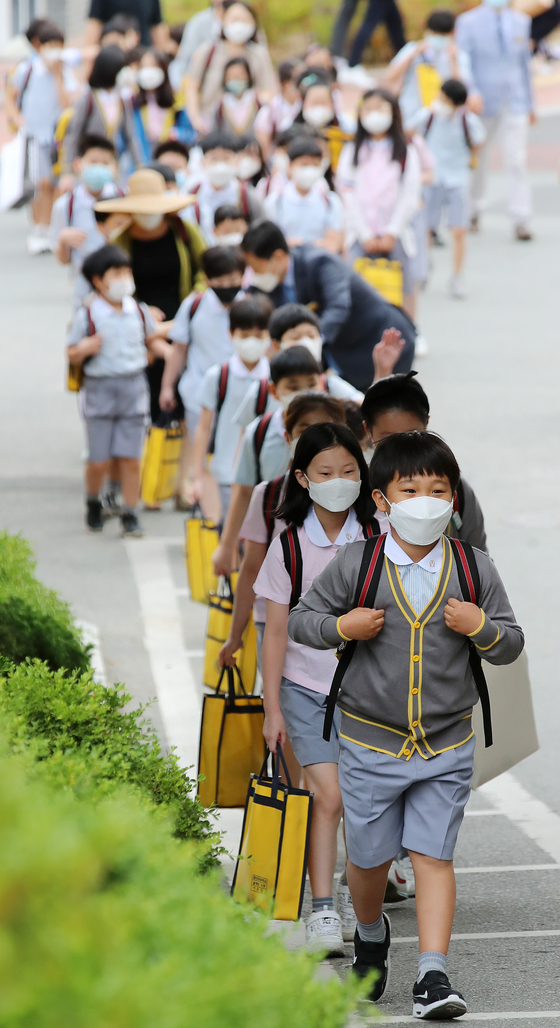 Students at Youngshin Elementary School in Daegu line up at school Wednesday as the third batch of nationwide students resumed normal classes for the first time since the pandemic struck. [NEWS1]

More than 500 schools in the Seoul metropolitan area closed Wednesday amid fears of Covid-19 transmission as several new cases popped up linked to Protestant churches.

Schools that didn’t close — the vast majority of schools nationwide — went ahead with welcoming a third batch of students finally starting the school year after a three-month delay due to the pandemic, which leaves only fifth, sixth and seventh graders behind in their homes studying online.

Of the 519 nationwide schools that closed Wednesday, all but three were in the Seoul metropolitan area: 12 in Seoul, 259 in the surrounding province of Gyeonggi and 245 in Incheon, according to data from the Ministry of Education.

One school each in Busan, Gumi and Gyeongsan, the last two of which are in the province of North Gyeongsang, closed as well.

The 519 closed schools account for about 2.5 percent of 20,902 nationwide schools. The fourth and last batch of students to go back to school — fifth, sixth and seventh graders — will do so next Monday if everything goes as planned.

The ministry said in a statement that eight cases of coronavirus infections were detected among school faculty members and students since the first batch returned to classrooms two weeks ago on May 20, but that none of these cases caused any secondary infections on school premises.

Nevertheless, Education Minister Yoo Eun-hye said Wednesday she was “solemnly” observing the recent spread of the virus in the Seoul metropolitan area. Prime Minister Chung Sye-kyun brushed off worries of some parents who want to keep their children at home due to fear of Covid-19 infection, saying Wednesday it was important for students to return to school and for everyone in society to help make that possible. 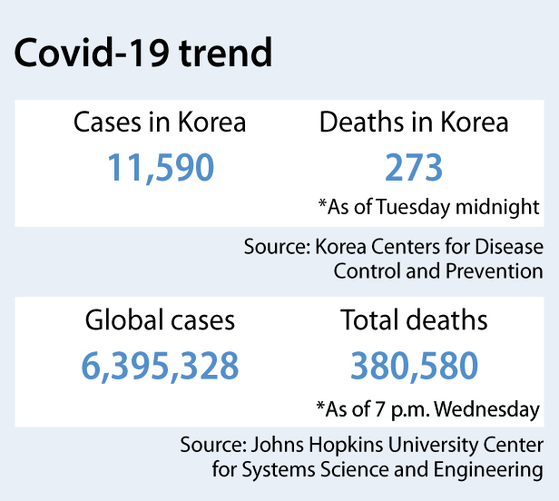 The Korea Centers for Disease Control and Prevention (KCDC) announced Wednesday morning that 49 new cases of infection were detected across the nation Tuesday, 46 of which were domestic cases, up from 36 the previous day — 17 in Seoul, 17 in Incheon and 11 in Gyeonggi. One case emerged from Daegu.

Korea’s total case load now stands at 11,590. By Tuesday midnight, 273 people had died, up by one from the day before, while 10,467 people had been declared fully recovered, up by 21 from the previous day.

The cluster from a chain of small churches in the Seoul metropolitan area, mostly in Incheon, has grown to 55 infections by Tuesday midnight, up by 10 from Monday midnight, the KCDC said. Thirteen patients are said to be living in Seoul, 33 in Incheon and nine in Gyeonggi.

A 57-year-old female pastor at a small church in Incheon is believed to be the initial spreader of the virus in the cluster. Health officials said she participated in several prayer meetings and revival services — which are common among small, newly established churches in Korea — in four different churches from May 25 to 28 in and around Incheon, which were attended by many worshippers from other churches as well, leading the virus to spread in their local communities.

KCDC Director Jung Eun-kyeong said Wednesday in a press briefing that it appears the church cluster traces to two earlier clusters that emerged from clubs and bars in Itaewong-dong, central Seoul, in early May, and at the Korean e-commerce company Coupang’s distribution center in Bucheon, Gyeonggi, in late May. While there’s no clear link proving so yet, Jung pointed out that most infections in the church cluster were coming near the previous hot spots, and that epidemiologists assume patients with light or no symptoms of Covid-19 in the church cluster silently spread the disease among themselves during the prayer gatherings.

Two cases were added to the Coupang cluster Tuesday, bringing total cases to 119, while the Itaewon cluster grew to 272 cases, up by two from the previous day. All four cases were from people who had contact with an Itaewon club-goer or a Coupang worker.