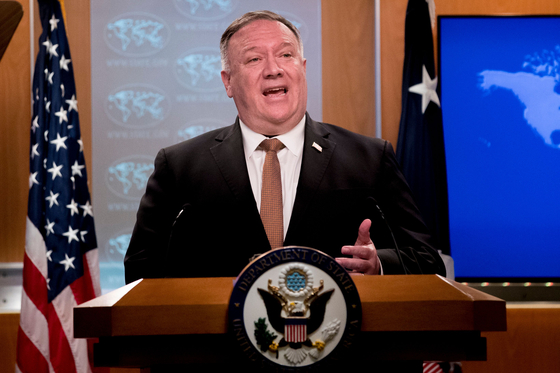 U.S. Secretary of State Mike Pompeo speaks during a news conference in Washington on Wednesday. [AFP/YONHAP]

U.S. President Donald Trump would hold another summit with North Korean leader Kim Jong-un, but only if there’s a “sufficient likelihood” of further progress from their first meeting in Singapore, Secretary of State Mike Pompeo said Wednesday.

“The North Koreans have given mixed signals,” Pompeo told the Hill in a Wednesday interview, “but the truth is President Trump only wants to engage in a summit if we believe there’s a sufficient likelihood that we can make real progress in achieving the outcomes that were set forth in Singapore” on June 12, 2018.

He addressed speculation surrounding the possibility of another Kim-Trump summit before the U.S. presidential elections on Nov. 3, or the so-called “October surprise,” despite North Korean officials indicating they are not keen on another meeting.

Pompeo indicated that the ball is in Pyongyang’s court.

“North Koreans have chosen at this point in time not to engage in a way that can lead to a potential solution. We hope they’ll change their mind,” he said.

He added that other countries in the region, including South Korea, Japan and China, want to see North Korea denuclearize, and that this has to happen “in a way that is completely verifiable.”

“We are still continuing that mission,” the top U.S. envoy said, noting the North’s continued suspension of long-range missile and nuclear testing. “Now it’s time to get to the harder problems and secure a better outcome not only for the security of the American people, but for the people of North Korea as well.”

“Under such circumstances, I am of the view that the DPRK-U.S. summit talks is not needed this year and beyond, and for our part, it is not beneficial to us unless the United States shows decisive change in its stand,” she said, using the acronym for the North’s official name, the Democratic People’s Republic of Korea.

North Korea and the United States clashed over the scope of denuclearization needed for some sanctions relief during the collapsed second Kim-Trump summit in Hanoi in February 2019. An impromptu third Kim-Trump reunion at the inter-Korean border in June 2019 and working-level talks led by Biegun in Stockholm last October did not bridge those differences.

Kim Yo-jong in the statement noted that leader Kim Jong-Un and President Trump’s relationship is “undoubtedly good and solid,” but said that the North Korean government should not have to adjust its tactics on its nuclear program and toward the United States based on this alone, adding it has to also deal with “the succeeding U.S. administration, and the U.S. at large.”

Her remarks followed a visit by Stephen Biegun, the U.S. deputy secretary of state, to Seoul and Tokyo last week to discuss regional issues including North Korean denuclearization.

Biegun said in Seoul on July 8 that when a capable North Korean negotiating counterpart is appointed, “they will find us ready at that very moment,” signaling Washington continues to remain ready to engage with Pyongyang.

Pompeo in virtual remarks to the Economic Club of New York Wednesday said that a third Kim-Trump summit before the U.S. presidential elections in November was “unlikely,” as it is already July.

“In the event that it was appropriate, we thought we could make material progress and the best way to do that was to put President Trump with Chairman Kim to do it,” said Pompeo.

“I’m hopeful that we’ll be able to have a senior discussion before too long and hopefully advance the ball in that respect,” he said.

Pompeo said that Trump and Kim “laid down a broad set of objectives” in their first summit in Singapore and agreed to the denuclearization of the Korean Peninsula “with a fully verified mechanism to ensure that had taken place,” alongside prosperity for the North Korean people and a security situation that was “satisfactory” to both North and South Korea.

Addressing a reporter’s question regarding possible senior-level talks with Pyongyang, Kim In-chul, the spokesman of Seoul’s Foreign Ministry, said in a briefing Thursday, “Last week, Deputy Secretary of State Biegun visited South Korea and said that dialogue with North Korea is the only way forward and that he is doing his utmost to resume dialogue.”

He noted that Biegun in his talks with Seoul officials said that he holds “a flexible position toward reaching a well-balanced agreement” with the North.

President Moon Jae-in at the beginning of the month indicated he is keen on a third Kim-Trump summit before the U.S. elections, though Pyongyang has severed its communications with Seoul, blowing up a joint liaison office last month.

South Korea has also been put in an awkward position amid an intensifying rivalry between the United States and China, as the two sides have clashed over issues including accountability for the coronavirus pandemic, trade, militarization of the South China Sea and the new Hong Kong security law.

In his interview with the Hill, Pompeo identified China as the top security challenge if Trump is elected for a second term.

“Not just [Britain], but 190 countries — we want every one of them to make sure that their citizens’ data isn’t in the hands of the Chinese Communist Party,” he said.

Britain, one of the countries pressured by the United States, banned Huawei equipment from its 5G telecom network earlier this week, reversing a January decision.

In his remarks to the Economic Club, Pompeo specifically called out South Korea — along with Japan, Australia, India, Israel and Brazil — as “countries that are significant economies in the world, with true national security capabilities who have a shared understanding of how nations ought to participate on the global stage, and want the Chinese Communist Party to understand the expectation that they’ll participate with the same rules and reciprocity.”

The South Korean Ministry of Foreign Affairs on Thursday confirmed plans to turn its temporary task force on strategic coordination to deal with Sino-U.S. tensions launched in June 2019 into a permanent division.