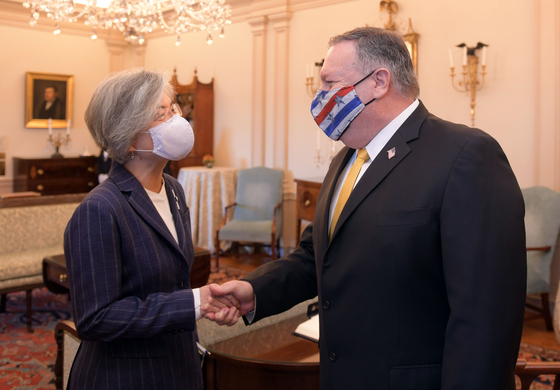 
Korean Foreign Minister Kang Kyung-wha and U.S. Secretary of State Mike Pompeo reaffirmed their commitment to ensuring peace on the Korean Peninsula, meeting face to face for the first time since the coronavirus pandemic on Monday.

Seoul’s Ministry of Foreign Affairs said in a statement Tuesday that the two diplomats agreed that the “two countries should continue efforts to advance the [Republic of Korea]-U.S. relations and make progress in the Korean Peninsula peace process based on the staunch ROK-U.S. alliance, and agreed to continue communication and consultations at various levels between the diplomatic authorities.”

Kang’s meeting comes two days after former U.S. Vice President Joe Biden won the presidential election, making her the first top diplomat of a key U.S. ally to make a visit to Washington since the results were announced.

The ministry said that Kang and Pompeo in their luncheon meeting at the State Department discussed bilateral relations and areas of mutual interest including the Korean Peninsula issue and regional and global affairs.

The two sides assessed North Korea’s current movement and "stressed that they will maintain close coordination between the two countries in order to stably manage the situation on the Korean Peninsula," added the ministry.

They also noted that the Korea-U.S. alliance "has taken root as a comprehensive strategic alliance that strengthens cooperation not only on security but also on economic, regional and global issues."

The Foreign Ministry said that the two sides also noted that Korea and the United States were able to continue exchanges between the two countries, including for students, businesspeople and government officials, keeping their borders open without any major travel restrictions despite the Covid-19 pandemic. They also discussed economic recovery and global health, as well as the World Trade Organization (WTO) election. Korea's Trade Minister Yoo Myung-hee is on the final shortlist to become the next WTO director-general, along with Nigerian candidate Ngozi Okonjo-Iweala.

Cale Brown, deputy spokesman for the U.S. State Department, said in a statement Monday that Pompeo and Kang “discussed bilateral and regional priorities, including coordination on ensuring peace on the Korean Peninsula and expanding cooperation through the U.S. Indo-Pacific Strategy and the ROK [Republic of Korea] New Southern Policy.”

The Trump administration’s Indo-Pacific Strategy appears to be aimed at containing China amid a growing Sino-U.S. rivalry, while the New Southern Policy is the Moon Jae-in administration’s initiative for economic and diplomatic cooperation with Southeast Asia and India.

But the State Department spokesman only said that the two sides “reaffirmed the enduring strength and importance of the U.S.-ROK Alliance, the linchpin to peace and security for the Indo-Pacific region.”

It added that the envoys “reinforced [their] joint commitment to defending the rules-based international order, as well as ensuring the alliance is prepared to face the emerging challenges of the 21st century.”

Pompeo later Monday tweeted a photo of his meeting with Kang and wrote: “Excellent meeting with Republic of Korea Foreign Minister Kang Kyung-wha today to discuss coordination on ensuring peace on the Korean Peninsula. The enduring strength of the U.S.-ROK Alliance is important to the Indo-Pacific region and the world.”

Kang’s Washington visit came on Pompeo’s invitation, after the secretary canceled a trip to Seoul following Trump’s coronavirus diagnosis last month. It may be the two diplomats’ last face-to-face meeting, with the Biden administration assuming power on Jan. 20 next year.

Pompeo, a former Central Intelligence Agency director, played a key role in the early stages of getting North Korean denuclearization negotiations going with several furtive visits to Pyongyang since 2018. He has served as the top U.S. diplomat since April 2018, closely coordinating with Kang on peninsula issues for the past year and a half.

Despite Donald Trump effectively becoming a lame-duck president, Seoul has expressed an intent to continue working with the current administration and the incoming president to avoid a vacuum in Korean Peninsula peace efforts and to avoid backpedaling on the progress made in recent years.

Last month, Suh Hoon, the director of the Blue House National Security Office, made an unannounced visit to Washington and met with U.S. National Security Adviser Robert O’Brien. The two sides had reportedly discussed the 2021 Tokyo Summer Olympics as a possible occasion to get North Korea-U.S. negotiations back on track. It is unclear if such a plan could be feasible and whether there could be another repeat of the 2018 PyeongChang Winter Olympics, which served as a springboard for the current détente on the peninsula.

Kang was also expected to meet with scholars at think tanks and members of the U.S. Congress, including outreach to Biden’s foreign affairs and security advisers, during the four-day trip which runs until Wednesday.

While the foreign minister did not reveal her schedule outside of talks with Pompeo, Kang was reportedly working on meeting with figures in the Biden campaign and Democratic Party, including Sen. Chris Coons of Delaware, a possible U.S. secretary of state candidate, and Michèle Flournoy, a former under secretary of defense for policy under President Barack Obama, named as a defense secretary contender.

With less than three months left in his presidency, President Trump announced on Twitter Monday that he had fired U.S. Defense Secretary Mark Esper, announcing that he will be replaced by Christopher Miller, the director of the National Counterterrorism Center.