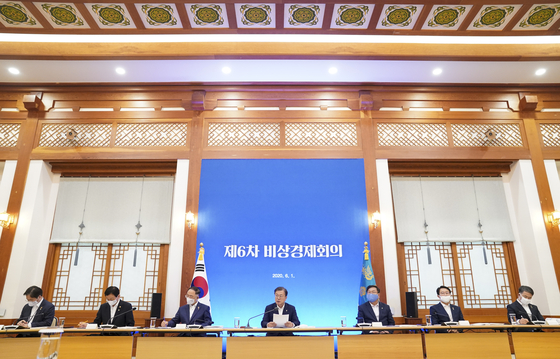 President Moon Jae-in hosts an emergency economic meeting, his first in 40 days, at the Blue House on Monday. [YONHAP]

The government vowed on Monday to invest 76 trillion won ($62 billion) in a so-called Korean New Deal by 2025.


The goal is to get Korea through the coronavirus crisis and create stable jobs in large numbers through sustainable growth concentrating on digital and green industries.

The government will first invest 31.3 trillion won by 2022, which will be focused on creating 550,000 jobs through the Korean New Deal and investments in job security programs including expanding eligibility for employment insurance to include artists and golf caddies as well as parcel delivery workers.

Of that investment, 5.1 trillion won will be funded through a third supplementary budget for this year.

The government plans to create a total of 330,000 jobs through its so-called Digital New Deal. This will require 13.4 trillion won in spending by 2022.

The government plans to be the first in the world to convert the network used by the government including local governments to 5G connectivity and store 15 percent of its data on cloud servers.

It will develop 5G and AI services used for safety and public health, including protection from infectious diseases. These services can also be used in manufacturing, product quality control, energy efficiency as well as on custom procedures.

The government will give vouchers for AI solutions to 600 or so small- and medium-sized enterprisess (SMEs) while creating a 1 trillion won fund that will invest in AI start-ups.

The government will invest 800 billion won to create 15,000 jobs in so-called digitally inclusive projects such as high-speed internet networks and Wi-Fi in public areas or facilities, including remote rural areas.

High-speed networks will be set up for 1,300 rural villages along with 41,000 free Wi-Fi systems for community centers and public health facilities. Some 18,000 outdated Wi-Fi systems will be replaced.

It will also run 3,000 digital education centers for groups like the elderly.

A 1.4 trillion won investment will be injected into technology and services that reduce human-to-human contact, such as online class, creating 28,000 jobs.

Projects will include digital education infrastructure including setting up Wi-Fi networks in 380,000 schoolrooms, replace 200,000 laptops that are at least five years old and give tablet PCs to 240,000 students at certain schools.

Some 39 public colleges will get upgrades to their servers and network equipment while the government will subsidize online vocational training.

The government will develop a digital care system for young children and old people as well as people with disabilities.

To help SMEs conduct business remotely, the government will offer 4 million won per year to 160,000 companies to use the government's remote work systems while setting up video conferencing infrastructure for them.

The government will invest 4.8 trillion won in the digitization of public infrastructure, creating 65,000 jobs.

The program includes creating a digital map of the country and its transportation network and establishing a early warning disaster system.

Also a comprehensive management platform managing traffic, crime and fire prevention systems in cities whose residents exceed 200,000 will be developed.

The so-called Green New Deal will be hoping to create 133,000 jobs through a 12.9 trillion won investment by 2022 including 5.8 trillion won in environmentally friendly infrastructure that will contribute 89,000 jobs.

Also the government will create 100 projects targeted at so-called smart green cities that will use IT technology for water management as well as use the Internet of Things to monitor fine dust.

Additionally the government plans to test smart energy platforms at seven smart industrial complexes, which will not only monitor but manage energy efficiency, while creating 700 “clean factories” that will reduce pollution in manufacturing and 100 smart ecosystem plants that will attempt net-zero emission of pollutants through waste management and use of renewable energy.

The government will invest 5.4 trillion won, contributing to 33,000 jobs, through setting up a smart power grid for 5 million apartment units, and conduct energy evaluations of 3,000 private buildings that are 15 years old or older, establishing a big data platform.

Other projects include expanding the three major renewable energy sources — solar, wind and hydrogen — as well as encouraging owners of outdated diesel-fueled vehicles and large vessels to convert to environmentally friendly alternatives.

“The short-term goal of the Korean New Deal is to create sustainable, quality jobs through digital jobs and to create a new growth engine in the post coronavirus era,” Finance Minister Hong Nam-ki said Monday. “In the public sector, the government will preemptively invest in infrastructure in preparation for the future, which will spread to the private sector, expanding investment and jobs.”

The government was clear that its biggest concern at the moment was jobs, which have been hurt by the coronavirus.

President Moon Jae-in on Monday emphasized that the government will strongly push the New Deal, adding that this project will transform Korea’s economy from one that used to follow the examples of other major countries to becoming a trail blazer.

He said the government will mobilize all of its fiscal capacity to overcoming the economic crisis during his first emergency economic meeting in 40 days.

“In order to continue with the bold fiscal injection in the second half, we have created the largest supplementary budget,” Moon said.

He asked the National Assembly to quickly approve the budget.

“Even when adding the third supplementary budget, our national debt-to-GDP ratio increase when compared to other major countries is much smaller,” Moon said.
“In the second half we have to quickly recover our economy so an economic rebound is certain,” Moon said.

If so, it would be the slowest growth since 1998, when the economy contracted during the Asian economic crisis.

Consumer spending is expected to contract 1.2 percent year-on-year, a turnaround from a 1.9 percent increase last year.

Exports are expected to decline 8 percent year-on-year, although this would be less than 2019's 10.4 percent fall.

Imports, on the other hand, are likely to suffer a sharper drop this year from last year’s 6 percent to 8.7 percent.

The government plans to cushion the decline through spending, including the three supplementary budgets. The first two exceed 23.9 trillion won.

The third supplementary budget, which is to be announced on Wednesday, is expected to be at least 30 trillion won.

The government said its expansionary budget will not only encourage consumer spending and tourism but also reinforce investments.

To promote spending, the government will spend 168.4 billion won on discount vouchers that can be used in eight areas that have been most affected by the coronavirus pandemic including lodging houses, tourism facilities, movies, exhibitions and restaurants.

The government expects 900 billion won of spending to be generated from through the discount vouchers. The funding for the project will be financed through the third supplementary budget.

The government has also tripled its budget for 10 percent refunds when people purchase highly efficient consumer electronics from 150 billion won to 450 billion won.