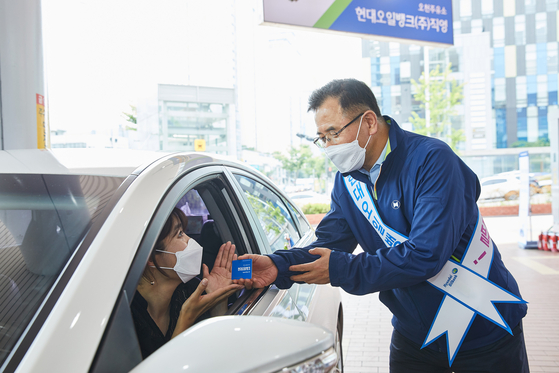 
Hyundai Oilbank became the second-largest gas station operator in Korea on Monday after acquiring all of SK Networks’ 300 or so branches in the country.


Some of the 307 gas stations immediately started operating under the Hyundai Oilbank sign on the same day. The acquisition raises Hyundai’s rank among local gas station brands to second, 21 years after it rose to No. 3 by acquiring branches from Hanwha Energy Plaza in 1999.

Hyundai now has more than 2,500 oil stations nationwide. SK Energy remains No. 1 in the business, with 3,075 stations in the country. GS Caltex, formerly No. 2, was pushed down to third place with 2,352. S-Oil has 2,162 stations operating nationwide.


The acquisition was approved by the Fair Trade Commission on Friday as the deal is unlikely to hurt market competition.

SK Networks’ sale of all of its 307 gas stations was one of the biggest deals in Korea’s oil industry last year, marking the end of a business the company took on in 1980. All of the country’s four oil refiners including affiliate SK Energy, GS Caltex and S-Oil had bid for the business, but the consortium of Hyundai Oilbank and Koramco Asset Management was announced as the final winner last November. An official contract was signed this March.

Koramco is the actual buyer that paid for SK Networks’ assets. Hyundai Oilbank is in charge of operating them.

For the oil refiner, the deal secures a stable sales point in the country. Local oil refiners generate revenue by selling products to local oil stations or through exports.

Although smaller than global exports, domestic demand is a relatively stable revenue source that is not directly impacted by the global economy and geopolitical factors, Hyundai said. The 307 stations are worth about 20,000 barrels per day.


As a way to diversify their business portfolio as fossil fuel loses popularity, oil companies have been looking for ways to use gas stations as nationwide customer touch points, adding unrelated services like parcel storage or installing eco-friendly charging systems.

Hyundai has been adding services like fast food chains, convenience stores and renting storage space in its stations — and has recently started providing alternative fuel options.

From this perspective, the 307 new branches give the company an advantage in terms of location, as half of them are in the Seoul Metropolitan area. Before the deal, Hyundai had less branches in this region than its competitors.