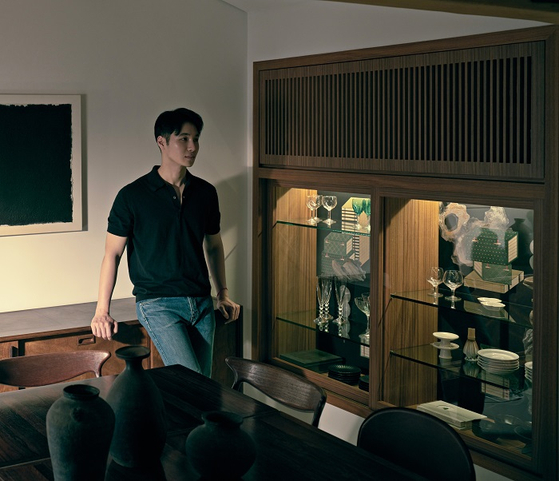 
The Silla History Exhibition at the Gyeongju National Museum in North Gyeongsang finally reopened in December after a complete renovation which took three years, embracing visitors with the grace and majesty of the thousand-year history of the Silla Dynasty (57 B.C. to A.D. 935).

The renovation included safety measures against earthquakes and also opened up the museum into a large, open-plan space, a huge contrast to the previous complex, maze-like structure that was difficult to navigate. Four-meter-high low-reflection glass ensures the maximum level of openness within the museum, while the latest LED lighting allows for viewers to immerse themselves into the exhibits to the fullest.

One space that makes a particular impact is the lobby, which has been completely remodeled. The dull-grey marble floor is gone and has been replaced with wooden floors, which perfectly compliment the sand-colored walls and creates a balance between natural, historical and modern design elements. The ceiling's details and the décor were both inspired by Silla’s earthenware and features commonly found in hanok, traditional Korean housing.

The mastermind behind the lobby is designer Teo Yang, who heads interior design studio, the Teo Yang Studio.

Yang, born in 1981, is an interior designer who incorporates traditional aesthetics into modern spaces. After studying at the Art Institute of Chicago, he worked under world-renowned designer Marcel Wanders and now runs Teo Yang Studio in Bukchon. His studio has participated in major projects such as designing the 123rd-floor rooftop lounge at Lotte World Tower as well as the VIP reception room at the Korean Cultural Center in Beijing and renovating the bathroom at the Manghyang rest stop. Recently, his studio played a role in renovating Kukje Gallery in Samcheong-dong, central Seoul. His portfolio shows one common theme — a mixture of modern and traditional aesthetics. He became the first Korean to make the London Design Week Top 10 list in 2017 for his collaboration with luxury bed brand Savoir, titled The MOON 01.

Yang traveled between Gyeongju and Seoul for six months to complete the work on the Silla History Exhibition. Yang chose three themes for the project; the continued experience; an emotional break; and encountering the artifacts.

“It’s about time that museums change from a place of education to a place of emotions,” he told the JoongAng Sunday, an affiliate of the Korea JoongAng Daily. “I wanted to show that Gyeongju National Museum’s artifacts of Silla can inspire our design in the 21st century, even after thousands of years.” 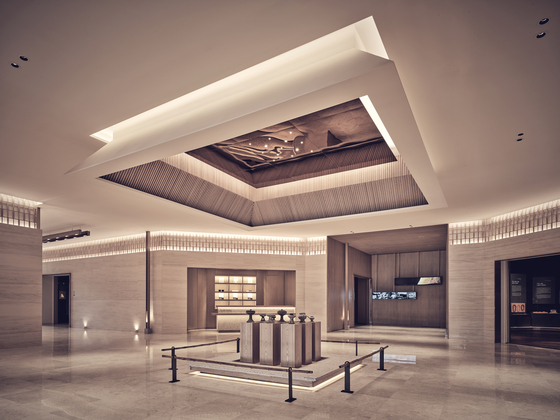 The renovated Silla History Exhibition at the Gyeongju National Museum in North Gyeongsang was designed by Teo Yang, using a combination of sand-like colors and wooden textures. [TEO YANG STUDIO]


To ensure a sense of continued experience, Yang tore down the wall that used to stand at the end of the lobby leading to different hallways and replaced it with glass windows so that people can see inside the exhibit halls. What he dubs as “open-ended” design, in which the end of one structure acts as the beginning of another, is meant to prolong visitors’ viewing time of artifacts, which naturally leads them to pay more attention to what's in front of them.

He also replaced an entrance of the building with glass windows, bringing the mountainous landscape of Gyeongju into the museum’s indoor space. This is aimed at giving visitors an emotional break from their busy lives, he said.

“I placed a lion-shaped stone statue in front of the window,” he said. “Usually, an artifact would need to be lit from the front. Having it face the museum and have the sun to its back was a way to include the artifact as a part of the Gyeongju landscape.” 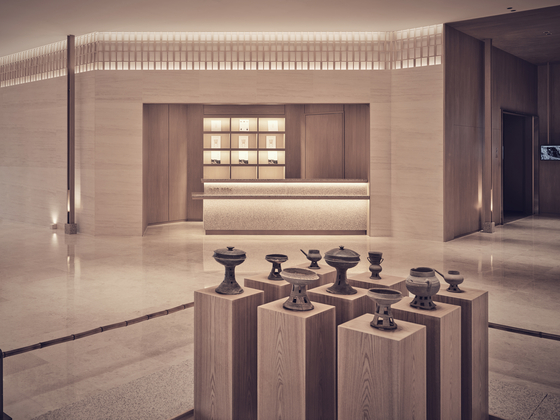 An exposed exhibit displaying Silla artifacts and earthenware welcomes guests at the center of the museum's lobby. [TEO YANG STUDIO] 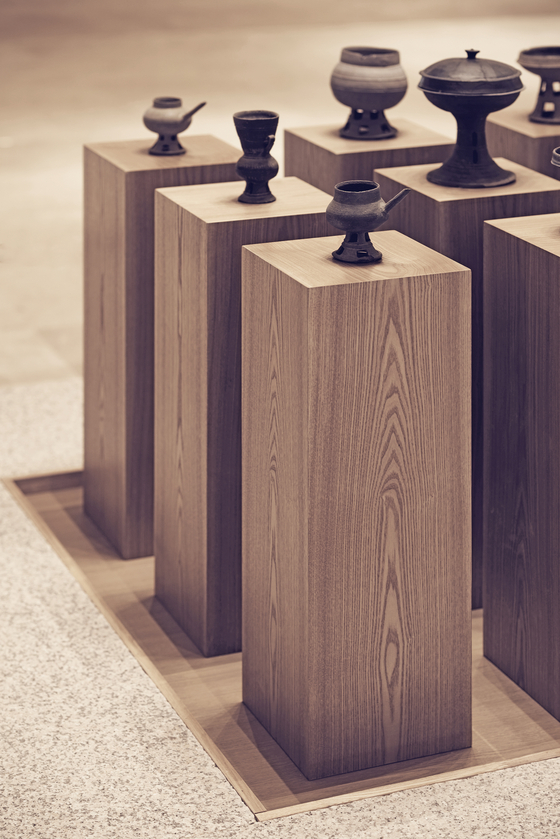 An exposed exhibit displaying Silla’s artifacts and earthenware welcomes guests at the center of the museum's lobby. [TEO YANG STUDIO]


The highlight of the lobby is situated at the center — an exposed exhibit featuring Silla artifacts placed on pillars, allowing visitors to enjoy the textures and colors up close and personal.

A 21st-century museum is not only a place of preservation, but also carries the mission of birthing new culture from the experience it offers, and that very goal was achieved by Yang’s new design.

“Every time I went to a museum, it made me sad to see the artifacts through the filter of a glass box,” said Yang. “I wanted to experience the color and beauty of Silla in its entirety.”

A smaller lobby of the Silla Art Gallery, located on the second floor of the museum, has also been designed in the same scheme. A statue of the Bhaisajyaguru, or the Medicine Buddha, and a stone statue of the Pensive Bodhisattva from Songhwa Mountain stand on either end of the lobby and a wall has again been opened to outside scenery by a glass window so that Gyeongju’s nature becomes a feature of the space. Yang took particular care in the position and height of the pedestals, so that the impact of the two Buddhas is maximized. 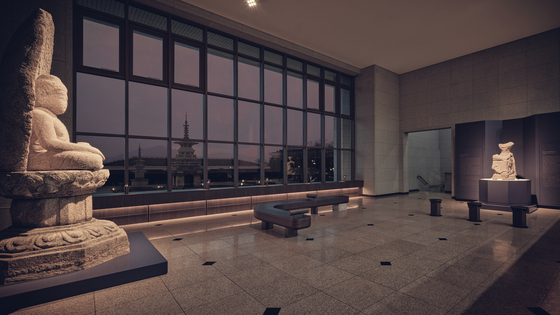 The renovated Silla Art Gallery lobby, located on the second floor of the museum, has been opened up to the outer landscape with a glass window, with two Buddhas sitting on either end of the hall. [TEO YANG STUDIO]


“I thought about how the people of Silla, who dreamed of a Pure Buddhist Land, would sit in front of a Buddha; where they would sit, at what height and what angle. I found the location and angle of the seats where people can feel both the religious majesty and comforting sensation,” he said.

Yang described himself as “someone who’s used to the narrative thought process that links the past, present and future, before being a designer.”

“My role is to find beauty from the past and ask why it existed and what philosophy it contained, then find the answer to reinterpret it in a way that I can deliver a sense of emotion and relaxation to contemporary people,” he said.

This is perhaps the reason why overseas critics and designers have dubbed him a “great storytelling designer.” For instance, when he worked with Italian luxury brand Fendi to make the Peekaboo Bags, he first created a book rather than the bag itself. He researched the social status and images of Joseon (1392-1910) females to find a correlation between women and luxury bags. Later, he sewed on a 3-d printed lacquer varnished image of a Joseon woman venturing on with a torchlight to pioneer her own fate.

Even when he worked with British wallpaper company De Gournay, whose products are so sought-after that it’s said people “rip off the walls” when they move houses, creating the company’s very first Korean collection, he took extra time to make sure that his partner understood the genre and style of ancient Korean art. 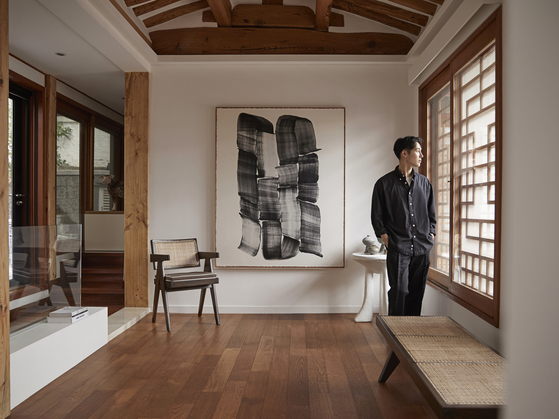 
“I’m actually getting criticized for working more with Western brands,” Yang said, jokingly. “People tell me off for not using hangul when I’m introducing Korean culture. I think drawing a line between what can and cannot be done is just like dumping our culture in a warehouse named ‘the past.’ There are things that exist now and it’s only right that we respect them, but there are more appropriate ways to communicate with the Western world or the millennial and Gen Z generations.”

Yang says he hasn’t slept for more than three to four hours for the last eight years.

“The essence of designing a space means making people look at the same thing every day. I take great responsibility in that and I’m trying my best to penetrate the past, present and future of our culture,” he said.