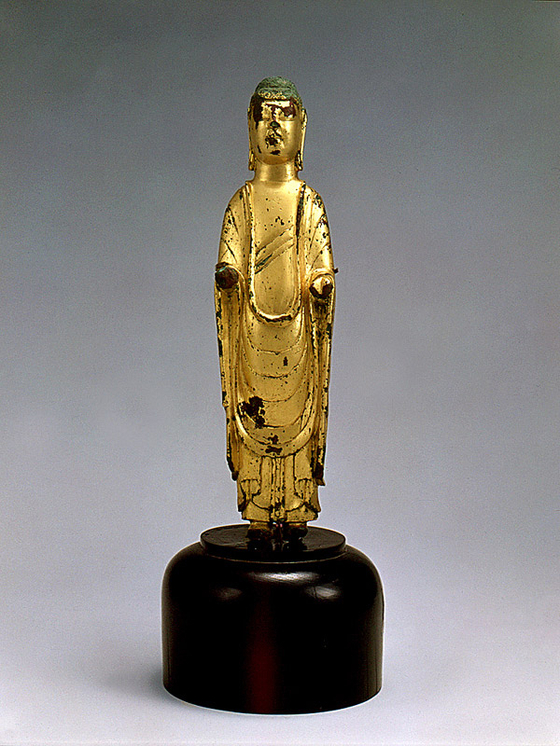 This 30-centimeter (11 inches) tall Standing Gilt-bronze Bodhisattva was found by chance in Sinhwa-ri, Yangpyeong-gun, Gyeonggi Province during the farming of arable land in 1976. The farm appears to have once been the location of a temple, judging from various relics. Although the pedestal and a mandorla (a type of halo) are missing, it’s still in good condition and perfectly gilded. Giving the impression of abundance, this statue has an elongated, round face, with a lengthy and thick neck. The body is disproportionately long for the face. The robe, which covers both of the shoulders, forms U-shaped folds at the chest and stomach. The three diagonal lines on the chest are undergarments. The piled train depicts a bold line, which gives a natural and smooth impression. Since all the fingers on both of the hands are missing, it’s impossible to know exactly how the hands were shaped. Its right hand is raised with the palm facing the front, while the tip of its left hand is pointing down to the ground with the palm facing the front. The simple, cylindrical shaped body and U-shaped folds seem to be influenced by the Chinese Sui Dynasty. This statue is assumed to have been made in the Silla Dynasty, as Silla occupied the area around the Han River at the time.

Photos and text are provided by the Cultural Heritage Administration. For more information, call (042) 481-4650 or visit www.cha.go.kr