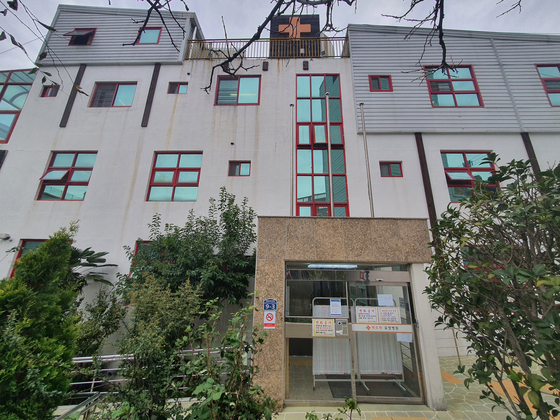 At least 53 coronavirus cases have been linked to a hospital for senior citizens in Buk District, Busan, the largest cluster that the city has ever seen. [YONHAP]

Fifty-two people at a hospital for senior citizens in Busan tested positive for the coronavirus Wednesday, the largest cluster in Korea’s second-biggest city to date.

Nationwide, health authorities said 84 people were diagnosed with the coronavirus Tuesday, down from 102 cases the day before.

How the virus reached the hospital, named Haeddeurak, in Busan’s Buk District is yet unknown.

An assistant nurse tested positive on Tuesday after coming down with symptoms, prompting the hospital to test all its patients and medical staff, a total of 278 people, to check whether anyone else had the virus.

Among those tested, 52 turned out positive Wednesday morning — 42 people who were hospitalized at the hospital plus 10 workers. The rest were negative. Including the assistant nurse, there are now at least 53 coronavirus patients connected to the hospital.

Busan health officials said the assistant nurse testified feeling a fever from Oct. 8 after having physical contact with a patient at the hospital who died at 9 p.m. Monday. The patient was posthumously diagnosed with the coronavirus Wednesday, and counted among the hospital’s cluster of 53.

The hospital was placed under cohort isolation Wednesday — the shutting down of an entire building or institution to prevent the spread of the virus.

The hospital had prohibited outsiders from visiting patients for a few months since March out of fear of coronavirus transmission. In July, as nationwide coronavirus cases dropped, it allowed visitors to see their loved ones through a glass divider. It’s unclear whether the virus entered the hospital from those visits.

Mandeok-dong, the neighborhood that is home to the hospital, has been seeing a mini-surge in coronavirus cases lately, which could mean the cluster was affected by community spread. 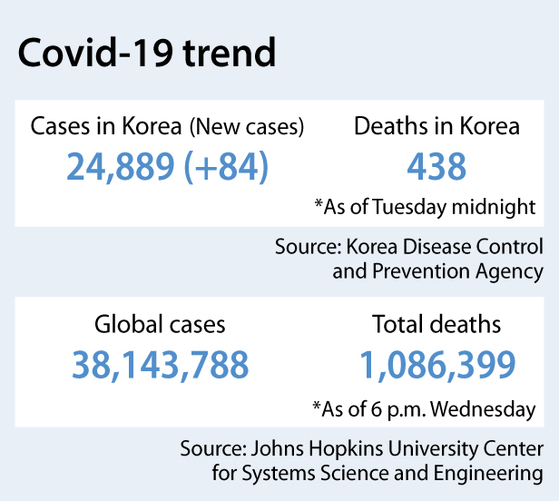 Yoon Tae-ho, an official at the Central Disaster Management Headquarters, raised the chance that a medical staffer at the hospital brought the virus into the building as he or she was coming to work.

“Patients [in hospitals] do not pose much danger because they’re tested for the coronavirus before hospitalization,” Yoon said in a Wednesday press briefing. “But medical workers constantly come and go, so there’s a possibility they contracted the disease [outside the hospital and brought the virus to their patients], leading to the cluster.”

Yoon said the central government was considering testing every single worker at senior citizen hospitals and nursing homes in the greater Seoul area — Seoul, Incheon and Gyeonggi — to prevent a possible cluster.

A surge in imported infections is another worry.

Among Tuesday’s new infections across the country, 31 were imported cases, the second day in a row that the figure was over 30. For two weeks prior to Monday, Korea saw only 10 to 20 imported cases on average.

Out of Tuesday’s imported cases, 13 were from the United States, five from the Philippines, three from Japan, two each from Uzbekistan, Russia and Nepal and one each from Myanmar, Kuwait, Mexico and Guatemala, according to data from the Korea Disease Control and Prevention Agency (KDCA).

All 13 cases from the United States were traced to the U.S. military base in Pyeongtaek, Gyeonggi. They were identified as American soldiers who recently arrived in Korea and were undergoing 14 days of self-quarantine.

Among Tuesday’s 53 domestic infections, 23 were in Seoul, 15 in Gyeonggi, eight in Incheon, four in Daejeon, two in Busan and one in South Chungcheong.

Four people died Tuesday, bringing total deaths to 438, while 167 patients recovered, raising total recoveries to 23,030. As of Tuesday at midnight, Korea had counted 24,889 coronavirus patients in all.