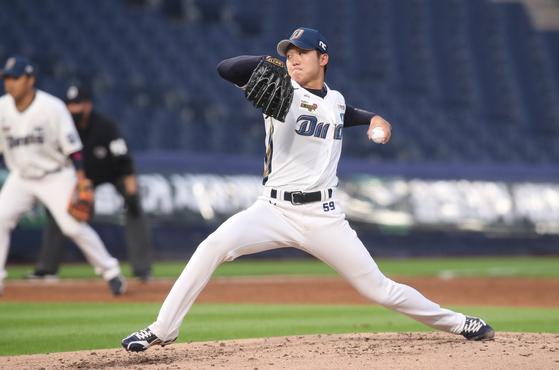 Koo Chang-mo of the NC Dinos throws a pitch during a game against the Kiwoom Heroes at Changwon NC Park in Changwon on May 26. [NEWS1]

Back in 2017, when Kim Kyung-moon, now the manager of the Korean national baseball team, took the helm of the NC Dinos, he predicted that the then-20-year-old left-handed pitcher Koo Chang-mo would follow in the hallowed footprints of KBO legends like Ryu Hyun-jin and Yang Hyeon-jong as Korea's next great left-handed pitcher.


During his time with the Dinos, Kim took a special interest in Koo, assigning him as a starter since 2017 and taking close care of the developing player. Kim made sure that Koo didn't throw more than 100 pitches a game, and even when he struggled and fell apart on the mound, Kim tried to keep him in.

“Koo Chang-mo has to lead NC, and he will become the leading domestic pitcher in Korean baseball,” Kim said.

Having started in five games this season as of Tuesday, Koo has picked up four wins and no losses. Even in his one no-decision game against the Doosan Bears on May 20, Koo still fulfilled his role on the mound. Throughout eight innings, he only gave up a run while giving up two hits and a walk.

Koo's performance has been good enough to keep his ERA as low as 0.51, topping the league as of Monday. Along with the ERA, Koo also tops the league in strikeouts, at 38, and is tied in wins, at four, with Raul Alcantara of the Bears and Eric Jokisch of the Kiwoom Heroes.

Koo has tossed in a total of 35 innings so far and only gave up 12 hits. At this pace, Koo seems likely to pick up 10 wins or more for a second straight season. He may also have a shot at winning an individual award by the end of the year.


“Chang-mo was throwing fearsome pitches,” Yang said. “I think he will become Korea’s leading pitcher in the future.”

But it’s not only Yang. The Dinos’ current manager Lee Dong-wook as well as other managers have also complimented Koo’s performance.


“By picking up 10 wins last year, he’s gained confidence,” Lee said. “I think he started to see how to move forward from this point.”

Kim Tae-hyung, manager of the Bears, perhaps NC's biggest competitor in the KBO, was also full of compliments.

“He’s become a completely different [pitcher] from last year," said Kim. "I think the speed of his pitches increased and he can throw various breaking balls. It’s really surprising.”

Koo’s average fastball is 143 kilometers per hour (89 miles per hour), but by controlling his speed, he’s made improvements in his control. Along with that, Koo also mixes up other pitches by tossing a forkball, slider and curveball.

Having joined the Dinos in 2015, Koo made his KBO debut in 2016 as a relief pitcher. In 2017 he became a starter. Over the past three seasons, Koo’s gone through a lot. Despite earning former manager Kim’s trust and support, he struggled to play full-time due to a lack of stamina.

Things took a turn for the worse in the 2018 season. Up until July 2018, Koo picked up a win and 10 losses. He didn’t have the best ERA as he finished the season with 5.35, but even on days when he pitched well, he wasn’t too lucky. Due to this, he finished the 2018 season by picking up only five wins and 11 losses. Koo wasn't the only one struggling — 2018 was the only season in Dinos history that the club has finished in last place.

In 2019 Koo got off to a slower start than others due to pain in his side. Under the leadership of Dinos catcher Yang Eui-ji, when Koo did return to the mound, he quickly made improvements in control and finished the season with 10 wins and seven losses with a 3.20 ERA. He was the first left-handed pitcher to pick up 10 wins in the Changwon club's short history.

Koo wasn’t able to continue his performance in the post season due to a back injury. Making it worse, Koo ended up being excluded from the Korean national baseball team’s roster for the World Baseball Softball Confederation (WBSC) Premier 12.

As soon as Koo’s season ended, he fully focused on rehabilitation. Before he left for spring training at the end of last year, he said, “I’ll become a full starter. Since I took a break earlier than others, I focused on conditioning my body a lot. In games that I start in, I’ll make sure that our team can win as much as possible.”

The changes Koo made seem to have worked, not only for him but for the rest of the pitching staff.

Aside from Koo, the Dinos' pitchers are at the top of the majority of the individual standing as of 6 p.m. on Tuesday. Dinos closer Won Jong-hyan leads the league in saves at eight, while Park Jin-woo is tied for holds with his teammate Lim Jung-ho and the Wiz’s Ju Kwon, at six.Thanks to the quick improvement of the Dinos' young pitchers, the club is off to a great start this season, sitting comfortably at the top of the table.

Having proven that Kim’s faith all those years ago wasn't misplaced, Koo now has a bigger dream.


“I hear that lefty pitchers are becoming rare,” Koo said. “It’s an opportunity for me. I’ll try my best to become the next pitcher to continue the legacy of Yang Hyeon-jong and Kim Kwang-hyun.”