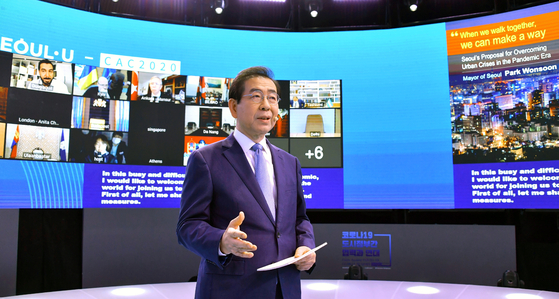 Seoul Mayor Park Won-soon speaks with mayors from across the world Tuesday night during a Covid-19 teleconference hosted by the Seoul Metropolitan Government. The Cities Against Covid-19 Global Summit 2020 runs through Friday and is streamed live on Seoul's official Korean and English-language YouTube channels. [YONHAP]

Seoul Mayor Park Won-soon proposed building an intercity network to fight infectious diseases during a teleconference with mayors from across the globe, hosted by his government Tuesday night.

The tentatively named Cities Alliance Against Pandemic (CAAP) would enable cities to battle future disasters and infectious disease outbreaks with international support, Park said during his keynote speech on the second day of the week-long Cities Against Covid-19 (CAC) Global Summit 2020.

The CAC, co-hosted by the Seoul Metropolitan Government and the Seoul Health Foundation, kicked off Monday and runs through Friday. It features 15 sessions streamed live on Seoul’s official Korean and English-language YouTube channels.

Some 120 panelists from 40 nations across the world are gathering to discuss how each country and city is coping with the crisis, as well as strategies to move forward in the post-Covid-19 age.

Panelists who live in Korea have been invited to a makeshift studio at Seoul City Hall in Jung District, central Seoul, while other panelists who live outside the country are participating virtually from their offices or homes.

No spectators have been allowed in the studio, to limit the possibility of coronavirus transmissions.

“It is challenging to create one standard that fits all the cities with different features and characteristics,” Park said Tuesday night. His speech, broadcast from the Seoul City Hall studio, brought together some 40 mayors throughout the world.

“Cooperation among municipal governments is essential so that we can all share our abundance and fulfill each other’s needs.”

Park credited speed, transparency and innovation — at both the state and municipal levels — as the three key principles for quickly bringing the Covid-19 outbreak under control in Korea.

Regarding innovation, he added in English, “Our anti-epidemic measures, like walk-through and drive-thru screening centers, emergency task forces and mobile health check-up apps, are now being recognized as the ‘K-quarantine.'"

London Mayor Sadiq Khan backed Seoul’s intercity network idea, saying it will allow cities across the world to maintain social, economic and cultural links that are “so integral to our success and shared prosperity.”

Toronto Mayor John Tory highlighted protection of the socially most vulnerable groups, especially homeless people, as a core part of his city’s Covid-19 response measures. He said vacant apartment buildings and hotels were emptied out to keep transients socially distanced from one another, and food banks were set up in closed public libraries.

Choe Jae-chun, a natural sciences professor at Ewha Womans University and a renowned biology scholar in Korea, warned Wednesday morning in a different session that humans need to embrace an “ecological turn” by halting their destruction of wildlife and biodiversity.

Choe warned that the current rate of environmental degradation could lead to the species' extinction by the end of the century. Global warming and humans' depletion of natural habitats have led to increased human exposure to zoonotic pathogens, he said, a trend that includes the coronavirus that causes Covid-19.

During the Wednesday morning session, Mayor Park outlined the city’s Green New Deal project for a cleaner environment, underscoring Seoul’s goal to “transform itself into a ‘net-zero city’ that achieves zero carbon emissions.”

Park pledged to elevate Seoul to a “global standard environment city” that sets an example for other cities.

On Thursday morning, Park is scheduled to have a one-on-one discussion with Jared Diamond, author of “Guns, Germs and Steel” (1997) and a professor of geography at the University of California, Los Angeles, for an hour and a half starting from 8 a.m., Seoul time, on the world’s paradigm shift after the coronavirus pandemic. Live streaming will be available on Seoul’s official English YouTube channel, www.youtube.com/seoulcityofficial

More information about the CAC teleconferences, including details of the schedule, can be found on the Seoul government’s official English website of the city’s Covid-19 responses, www.english.seoul.go.kr/covid/