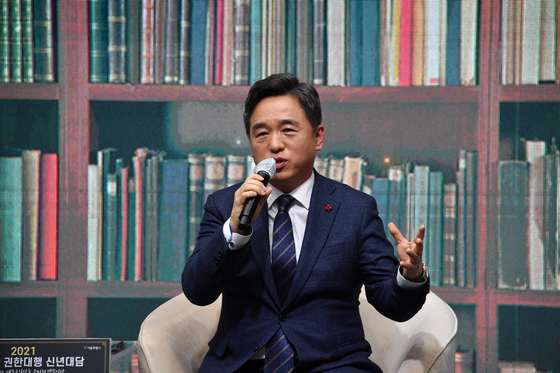 Acting Seoul Mayor Seo Jung-hyup talks to reporters via Zoom Tuesday from a studio in City Hall in central Seoul during a New Year’s press conference. Seo vowed to improve the city’s response system to infectious diseases and offer financial assistance to small-business owners struggling in the pandemic. [YONHAP]

Speaking to reporters via Zoom, Seo said the Seoul Metropolitan Government would “pre-emptively” prepare for the post-Covid-19 era by devising a “sustainable” public health system that protects citizens’ lives around the clock.

Seo said the city government will also establish a disaster management resource center to reserve goods that may run short during pandemics, such as face masks. An early warning system notifying the city government of the spread of infectious diseases will be founded as well.

With many people going out of business or struggling with employment due to the pandemic, Seo said the city government plans to create a total of 393,000 new jobs in the city and offer some 1 trillion won ($919 million) to small-business owners in loans.

Some 78.4 billion won will go toward initiatives to strengthen the safety net of essential workers such as babysitters and those employed by the delivery industry, as well as freelancers.

On the chances that the city government would raise utility charges or mass transit fees, Seo said those matters are being discussed with the Seoul Metropolitan Council.

“They haven’t been raised for a couple of years, so the operators have been struggling with management,” said Seo. “But it’s such a difficult time right now with Covid-19, so we will canvass opinions from our citizens once more.”

On public housing, Seo said the city plans to build 320,000 units by 2022 that are either built or managed through city coffers.

The city will separately purchase 4,100 more units to offer to newlyweds and young adults for cheap rent. A part of the rent plus the down payment will be supported by the city, he said.