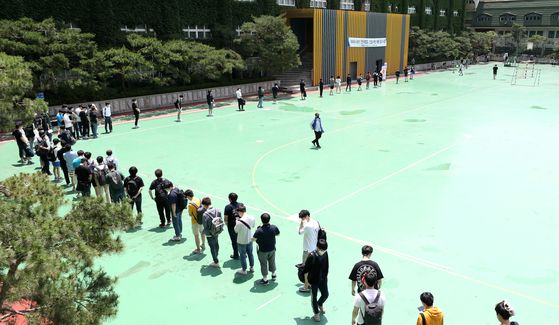 Applicants for jobs at Korea Railroad (Korail) queue up to enter a building on a college campus in Seongbuk District, central Seoul, Sunday afternoon, while practicing social distancing. Some 43,000 people applied to take the written exam, which was held in 24 test sites across the nation. [NEWS1]

More than 80 new coronavirus infections were diagnosed in Korea over the weekend as the prime minister warned of a second wave.

The vast majority of the cases came in numerous sub-clusters in the Seoul metropolitan area traced to health care company Richway in Gwanak District, southern Seoul, as health officials warned people were silently transmitting the virus in their local communities.

By 12 p.m. Sunday, the Richway cluster had 164 cases, 40 of whom visited the company directly. The rest had contact with those visitors. Of the total number, 89 live in Seoul, 50 in Gyeonggi, 20 in Incheon, three in Gangwon and two in South Chungcheong, data from the Korea Centers for Disease Control and Prevention (KCDC) showed.

Richway, a door-to-door sales business, is known to have run marketing seminars for the elderly, offering health guidelines, introducing them to their products and providing entertainment such as recreational activities. Visitors appear to have been infected at such events, officials said.

At least eight sub-clusters have been discovered so far in connection to Richway, including at churches, a call center, hagwon (private cram schools) and other businesses.

All in all, the KCDC announced Sunday that 34 new Covid-19 cases were detected across the nation Saturday, 49 cases on Friday and 56 cases on Thursday. The total case load now stands at 12,085.

By Saturday midnight, 277 people had died, while 10,718 people had been declared fully recovered.

Prime Minister Chung Sye-kyun expressed concerns about the recent clusters during a meeting last Friday with infectious disease pundits in Seoul, saying the government was currently eyeing the “unusual situation."

“We need to see what additional measures are necessary and prepare for a second wave of the pandemic,” Chung cautioned.

In one such move, the Korean government announced Friday that several social distancing guidelines that have been re-implemented for public spaces in Seoul, Incheon and Gyeonggi, late last month for two weeks will be “indefinitely extended” until daily new infections in the three areas drop back to single digits.

That means some 8,000 mostly state-run facilities like museums and zoos will remain shut, and businesses with a high risk of transmission — such as hagwon, PC bang (internet cafes), clubs and bars — will be recommended to close.

Health and Welfare Minister Park Neung-hoo, while announcing the extension, pointed out that 96 percent of patients who were diagnosed with Covid-19 over the past two weeks live in the Seoul metropolitan area. Health officials advised residents in the region not to leave their homes for social gatherings unless it was absolutely important, and abide by sanitation guidelines if they do.

“We have to subdue the pandemic with social distancing and personal hygiene until there’s a vaccine and treatment” for the virus, Kwon Jun-wook, deputy director of the KCDC, stressed Thursday.

“As someone who’s in charge for preventative measures, I’m sorry to say this, but right now [the government] is belatedly discovering [new clusters] after they’ve erupted and chasing after them,” Kwon said. 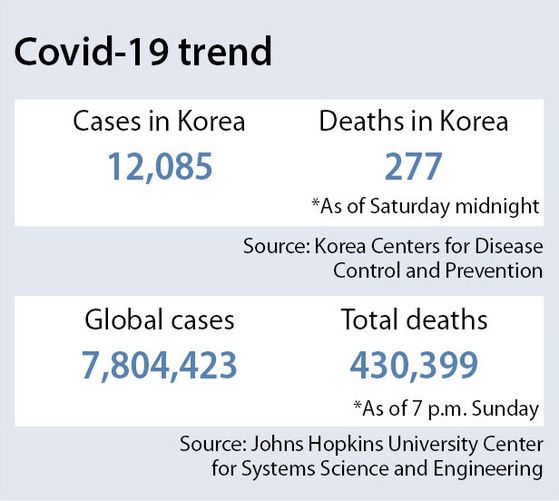 The largest sub-cluster traced to Richway was found in an interior design company in Gangnam District, southern Seoul, called Myeongseong Housing. By Sunday noon, the KCDC announced 30 related cases in total, ever since a worker there tested positive for Covid-19 on June 7 after visiting Richway on May 30. Myeongseong Housing held a seminar on June 6, and several attendees have come down with the disease.

A Myeongseong Housing worker spread the disease in a hagwon she attends in Gangnam, the Principle School of English, leading to some 14 cases of infections at that hagwon. A hagwon student who got infected transmitted the virus to at least two other people at his gym in Jungnang District, eastern Seoul, called Blue Lagoon Crossfit.

A similar chain of infections occurred at NBS Partners, another type of door-to-door sales business in Seongnam, Gyeonggi, when a Richway worker visited NBS Partners on May 30 and June 1, leading to several infections. NBS workers further spread the disease to multiple places, including a church in Seongnam, to which some eight infectious have been traced.

In Dobong District, northern Seoul, 17 cases were discovered at the Sung Sim Cure Center for the elderly, though no clear links have been found to Richway.