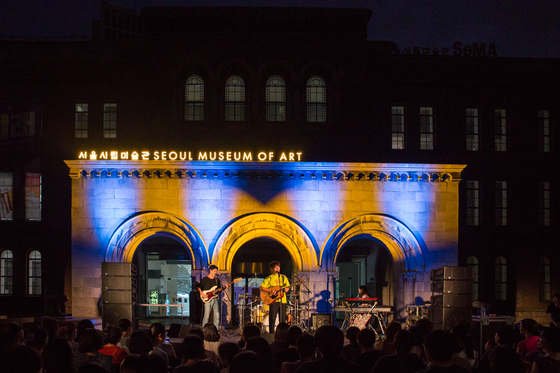 A band performs on a makeshift stage at the Seoul Museum of Art in central Seoul. The Seoul Metropolitan Government announced plans Wednesday to sponsor a variety of entertainment events in the capital during the following weeks. [SEOUL METROPOLITAN GOVERNMENT]

The Seoul Metropolitan Government will sponsor music and performing arts programs during the following weeks, in what the capital office said is part of a municipal effort to support artists hurt by the coronavirus pandemic while giving the general public a break from the coronavirus blues.

Nearly 1,200 teams of musicians, dancers, singers and magicians have been chosen by audition to join Seoul’s latest cultural initiative, which officially launched Wednesday and will run for several weeks. It includes more than 100 shows across the capital, the Seoul government office said Wednesday in a press release.

Specific details about the schedule are available in Korean on the Seoul Culture Portal website at culture.seoul.go.kr

One of the programs offers therapy to anyone struggling with depression during the Covid-19 outbreak. The city government said in a statement that its therapy hotline has received nearly 25,000 calls since February, and that starting in September, it’s planning to open a new website allowing users to anonymously chat about their ordeal with a therapist.

Another program will feature a group of performers traveling across the city to schools, hospitals, parks, playgrounds and parking lots to sing, dance and provide magic shows for the public.

Starting Thursday, applications will be received on the Seoul Culture Portal website and in the Seoul Metropolitan Library lobby in Jung District, central Seoul, for people who wish to have the performers come to them for exclusive shows. Those who submit the most telling stories will be chosen, the city said.

Other performances involving jazz, pop, rock, classical and traditional Korean music, as well as break dancing and magic, will be provided every Thursday this month at the Open Concert Hall on the third floor of Seoul Station in Yongsan District, central Seoul.

Other classical music performances and movies will take place in lobbies, front lawns and multipurpose halls at multiple museums in Seoul for several days this month.

The Seoul city government stressed that all performances will strictly abide by sanitation rules.

Acting Seoul Mayor Seo Jeong-hyup said in a statement that his office wishes to send “a message of hope” to everyone during these difficult times, especially those in the cultural and arts sector who have been without work.

Seo added that the performances will be shared online for others to see virtually.