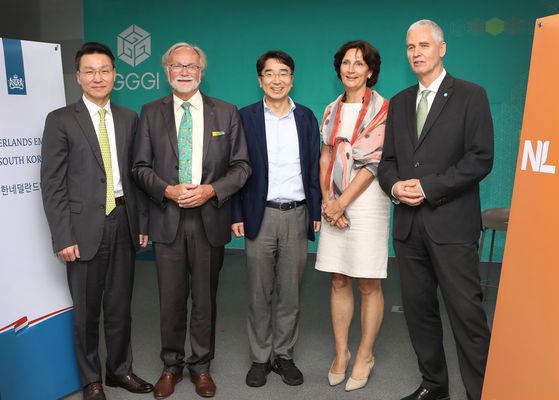 Marcel Beukeboom, climate envoy for the Netherlands, invited Korea to become the first Asian country to join the Powering Past Coal Alliance during a Korea-Netherlands climate conference in central Seoul on Tuesday.


"The conference illustrates what we can do, that we can still cooperate with a large distance between ourselves in this new time,” said Beukeboom, joining the conference at the Global Green Growth Institute (GGGI) via live streaming from the Netherlands. “Covid-19 has maybe moved the attention from climate change but it didn’t go away […] we have to think of different ways to cooperate. One example is the Powering Past Coal Alliance.”

The alliance was created in 2017 to encourage governments, businesses and organizations to phase out the use of power plants that burn coal without any technology to reduce carbon dioxide emissions. Members include the governments of the United Kingdom, Canada, Costa Rica, France and Germany, along with local governments and about 40 companies.

The Korean province of South Chungcheong joined the alliance in 2018, becoming the first Asian region to join the group.


“It would be good if the Republic of Korea becomes the first country in Asia to join the alliance, to be a leader in the region and at the G20 summit,” Beukeboom said.

Korea’s current plan on coal power extends through 2031, and calls for increasing the share of renewables and natural gas in its power supply. But the plan, announced by the Ministry of Environment in 2017, still falls short of climate campaigners’ expectations, allowing for nuclear and coal power to still account for 60 percent of electricity generation by 2030.

“In speaking of renewable energy resource investments, Korea is No. 1 — from the bottom of the list among OCED members,” EU Ambassador to Korea Michael Reiterer said. “That is not what Korea likes. I put the challenge to you to become No. 1 from the beginning.”

Climate Talk and Net Zero 2050, a conference hosted by GGGI and the Embassy of the Netherlands, included climate researchers and lawyers in Korea who have been closely watching government policies and industry changes regarding green energy.

“Korean companies like LG, Samsung and other conglomerates are being asked by their European and U.S. buyers to use renewable energy for their factories,” said Kim Sung-woo, head of the Environment and Energy Research Institute at Kim & Chang.

Kim mentioned a letter that BlackRock, a high-profile investor in Korea, sent to all investors in January this year, asking the companies to “publish a disclosure in line with industry-specific SASB [Sustainability Accounting Standards Board] guidelines by year's end” and to “disclose climate-related risks in line with the TCFD’s [Task Force on Climate-related Financial Disclosures] recommendations” — also within the year.

He noted that the requests have been received positively by CEOs.

“Two years ago when I talked to them regarding carbon reduction, renewables and ESG [environmental, social and corporate governance], I felt that they viewed those as luxury, a kind of addition, CSR [corporate social responsibility] and voluntary things,” he said. “But now I see some differences because of these signals and changes in the market.”

“One aspect of the Korean New Deal is the lack of milestones and specific targets for reaching 100 percent electric cars or net zero [emissions], so there has been a lot of criticism,” said You Jong-il, dean of the Korea Development Institute's School of Public Policy and Management.

The Moon Jae-in administration announced on June 1 the details of a proposed Korean New Deal, which largely consists of investments in job security, the digital and artificial intelligence sectors and green industries.

The plan calls for investing 12.9 trillion won ($10.8 billion) to upgrade aging infrastructure and fund company projects for renewable energy through 2022, which the government hopes will create 133,000 new jobs. That includes 5.8 trillion won to be set aside for environmentally friendly infrastructure, which the government predicts will create 89,000 jobs in the sector.

“I think the fact that the government included green investments in the 'New Deal' is a way to see progress as a glass half-full, but we will need to do more,” You said. “Unless you are making big changes on climate change, no one is going to consider you a leader in the international community.”

European officials briefed the audience on their progress toward meeting net-zero emissions targets.

“The plan is to phase out of coal-fired electricity production by 2030, accelerating renewable energy to 70 percent in 2030 and having 100 percent of newly sold passenger cars to be zero-emission by 2030,” said Joanne Doornewaard, the Dutch ambassador to Korea. “Sometimes you have to be ambitious. If you know there is a target, the companies have to find a way."

The Netherlands in 2018 proposed reducing its greenhouse gas emissions by 95 percent by 2050.


“Korea is so smart, you have all the technology, you are so advanced here in Korea,” she added. “There are so many assets to help you as citizens to play the role yourself to save the climate. It’s something that we have to do together, the people and the government.”

And the coronavirus pandemic could actually help accelerate the trend toward emissions reductions, said Frank Rijsberman, director-general of GGGI.


“Initially we were worried that the Covid pandemic would move all the attention away from climate change […] but we’re finding now that people are actually quite interested and more aware of sustainability issues than they were before,” Rijsberman said. “People are indicating that they would like to see climate action as part of Covid recovery.”

GGGI has been running a campaign, “Blue Skies & Net Zero 2050,” since last year to promote international cooperation to encourage the Korean government and businesses to ramp up its climate ambitions. The campaign has received the support of the embassies of Denmark, EU, France and the UK, as well as civic groups in Korea.