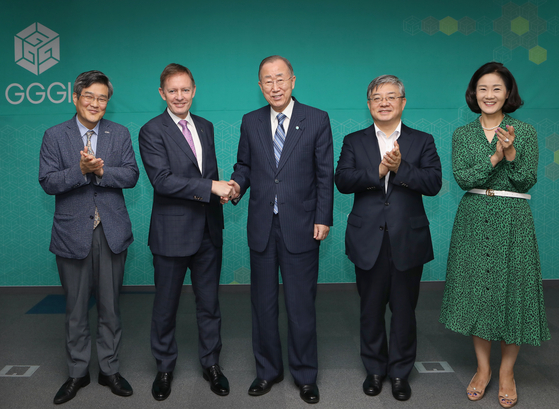 Ban Ki-moon, chairman and president of the Global Green Growth Institute (GGGI) and a former UN secretary general, center; Ambassador of New Zealand to Korea Philip Turner, second from left; and Yoo Yeon-chul, ambassador for climate change at Korea's Ministry of Foreign Affairs, second from right, at the conference on climate change hosted in central Seoul by the GGGI and the embassy on Tuesday. [PARK SANG-MOON]

Ban made his remarks during a conference on climate change hosted at the institute in central Seoul in cooperation with the New Zealand Embassy on Tuesday.

“The Green New Deal announced by President Moon Jae-in is a very ambitious deal. It is absolutely necessary to resuscitate the economic conditions of Korea, but there is a concern that the deal does not set a clear deadline on making our society carbon-free,” Ban said in an interview during the conference. “As former secretary general of the UN, I welcome and strongly support Korea’s domestic recovery packages but the climate action package should never be left in the backseat.”

The Korean government in July announced a two-part recovery package to counter the impacts of the Covid-19 pandemic, investing 58.2 trillion won in emerging technologies such as artificial intelligence (AI), and 73.4 trillion won in the green energy sector, including renewable power sources and smart grids to increase energy efficiency.

While the latter deal has been dubbed the Green New Deal, it has received criticism from the public and from industry experts, who say it lacks concrete and specific goals to achieve net-zero greenhouse gas emissions in Korea.

"Net-zero" refers to removing greenhouse gas emissions at the same rate as they are being produced — typically achieved through a combination of aggressively cutting emissions and undertaking measures like forest restoration to offset those new greenhouse gases being introduced into the atmosphere.

Representatives from the governments of New Zealand, Fiji and Papua New Guinea were present at the conference to speak of their net-zero goals and energy transition plans.

“In the past two years, the New Zealand government [laid down the] policies and legislative framework to cut our emissions in line with the Paris Agreement,” said James Shaw, the New Zealand minister for climate change, in a video message at the conference.

New Zealand's Parliament passed a zero carbon law last year which will aim to make the country carbon-neutral by 2050.

“To get us there, the legislation requires us to set up yearly carbon budgets,” Shaw said, adding that independent experts will be advising the budget’s formation. “This will help protect our climate change policy from day-to-day politics.”


“As the government-level agencies build decarbonization plans into programs, the private sector will be able to make business deals for a low-carbon future," she said.

Net-zero goals for Korea could soon be on the government’s agenda, according to Yoo Yeon-chul, ambassador for climate change at Korea’s Ministry of Foreign Affairs.

“I recognize that there is no target in net-zero emissions in Korea’s plan,” Yoo said at the conference. “I’d like to say that the Korean New Deal unveiled last July is not a final one but an evolving one. The net-zero emission goal is a huge goal — it requires a fundamental change of the whole society.”

Yoo said that public hearings about net-zero goals and long-term low emission development strategies (LEDS) will be hosted in September and October.

“We have time until the end of the year for net-zero targets and LEDS,” Yoo said. “We’d like to take a bottom-up approach that leaves no one behind.”

Participants at the conference agreed that the coupling of Covid-19 and climate change effects, as unfortunate as it is, offers the possibility of a win-win outcome across both the economy and public health sectors.

“Some people say that there is a trade-off between economic recovery and public health,” said New Zealand Ambassador to Korea Philip Turner. “The New Zealand prime minister said she does not believe that there is such a trade-off, that it is a false dichotomy and the best way forward is to deal with public health risks first, to provide stability and security to our people, which will help drive the economic recovery.”

Ban also said there is an opportunity to build Covid-19 economic recovery plans with a focus on sustainability.

“In fact, if we seize the opportunities now to ‘green’ the recovery — although no one wished for this pandemic — in the long run, we can make the best of the situation and perhaps make more progress toward the implementation of the Paris Agreement than before,” Ban said.