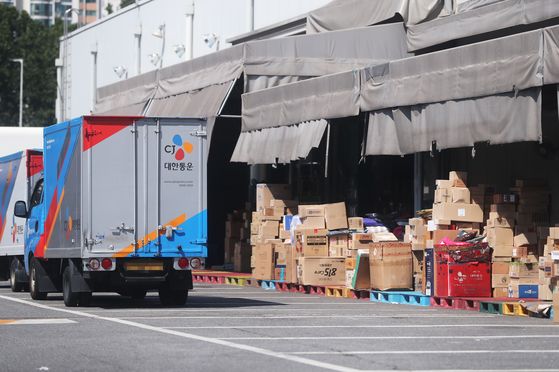 Packages piled up in front of the CJ Logistics terminal in Yeongdeungpo District in western Seoul, where a self-employed delivery person was confirmed to have contracted Covid-19 on Thursday. [YONHAP]

The CJ Logistics terminal in Yeongdeungpo District, western Seoul, remained shut on Friday after a parcel delivery person was confirmed on Thursday to have contracted Covid-19.


A total of 250 people from the terminal have been tested. The results were not reported as of Friday afternoon.

A self-employed man in his 60s who worked at the site on June 8 and 9 was found to be infected. He has kept himself quarantined since Thursday.

CJ Logistics will decide whether to reopen tomorrow depending on guidelines set by the health authorities.

The patient, who did not show clear symptoms, may have contracted the virus from a church in Geumcheon District, southern Seoul. The delivery person got tested after someone from the church tested positive.

The patient delivers parcels to parts of Yeouido, western Seoul, according to the logistics firm.

CJ Logistics said it tried to keep workers safe and facilities uncontaminated by distributing a million masks and installing hand sanitizers at work sites. Facilities have been cleaned twice a day.

Last month, workers at Coupang and Market Kurly distribution centers were confirmed to have contracted the virus. Some consumers said online they lost faith in the safety of the parcels delivered from the companies, but no infections have been reported from deliveries.