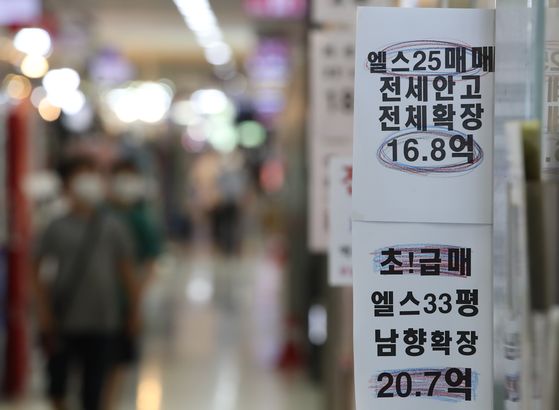 A real estate agency with signs advertising apartments for rent and sale in Jamsil on June 9. [YONHAP]


With property prices staging a comeback, real estate is once again taking center stage, and the government is threatening additional measures to cool the market.

“If the housing market shows signs of instability, we will not hesitate to take necessary measures,” Hong said.

“Housing prices overall including those in Seoul have been maintaining stability since the Dec. 16 measures. Especially due to the contraction of the economy recently, housing prices are expected to decline,” the Finance Minister said. “However, concerns over a rebound co-exist due to the low interest rates and abundance of liquidity.”

The Dec. 16 measures, which were 20th in a series of measures, were considered the toughest.

Hong said the government is closely monitoring the situation, as housing prices in Seoul and the greater Seoul area, which are heavily restricted, have been declining at a slower pace, while prices in areas not heavily restricted are rising steadily.

“The government’s determination to stabilize the real estate market that is directly related to the livelihoods of the public is consistent and firm,” Hong said.

“It is the government’s consistent position to introduce additional policies when the real estate market become unstable,” Eun said during a press briefing on Thursday. “If housing prices after falling to their lowest point show signs of rising, this makes the market unstable, and the government obviously has to establish measures accordingly."

According to the Korea Appraisal Board, Seoul apartment prices in the second week of this month rose for the first time in 10 weeks compared to the previous week. The index was up 0.02 percent.

Yoon Ji-hae, a researcher at Budongsan 114, said the recent increase in Seoul apartment prices was largely the result of increases in non-Gangnam District areas.

“The increase was especially big in neighborhoods where there’s a cluster of mid-to-low range apartments whose values are below 900 million won, ($748,000)” Yoon said.

Several apartments in Nowon, northern Seoul, last week were up between 5 million to 10 million won compared with the previous week, while an apartment in Geumcheon, central Seoul, rose 5 million won.

According to the Korea Appraisal Board, in 14 districts in northern Seoul, average apartment prices rose 0.01 percent compared to the previous week.

Price gains are noticeable in Gyeonggi and Incheon due to the balloon effect. The balloon effect is where the prices in regions less restricted rise due to strict regulations in other areas.

But even in Gangnam, where prices have been in a continuous decline since the government’s tough regulations announced on Dec. 16, the market rebounded slightly, with prices rising 0.02 percent.

Apartment prices in Songpa, southern Seoul, rose 0.05 percent as the government made plans to develop a major convention and exhibition cluster in the neighborhood.

“Business, which was heavily affected by the government’s regulation last year on top of the coronavirus pandemic that limited people from searching for new apartments, seems to be recovering lately,” said a real estate agent in Jamsil, who requested anonymity. “Nowadays more people are asking if there’s any apartments that are on sale, especially young couples. It seems that they are trying to buy homes before apartment prices go up.”

Some experts project that apartment prices are likely to continue to rise, especially those below 900 million won in the second half as liquidity sloshes around the economy.

Compensation to land owners where the three new cities that the government is planning is expected to be distributed in the second half. Another rate cut is also a possibility.

The Korea Capital Market Institute on Thursday released a report that another 0.25 percent cut might be possible in the second half as it projected Korea’s economy will shrink 0.8 percent on year.

The projection is more pessimistic than the Bank of Korea’s forecast of a 0.2 percent contraction and the Finance Minister’s forecast of 0.1 percent growth. If a second wave of coronavirus infection emerges in the fall, the economy could contract significantly. Rates could fall to zero in that scenario.

The central bank in March lowered the key interest rate to an all-time low of 0.75 percent. In May, it again lowered the rate to a new low of 0.5 percent.

“We could designate areas that will be regulated, further strengthen loan regulation or review other measures such as taxes,” Kim said.

President Moon Jae-in at the beginning of the year expressed his strong will in curbing the real estate market.

“[We] will never lose in the war against real estate speculation,” Moon said.