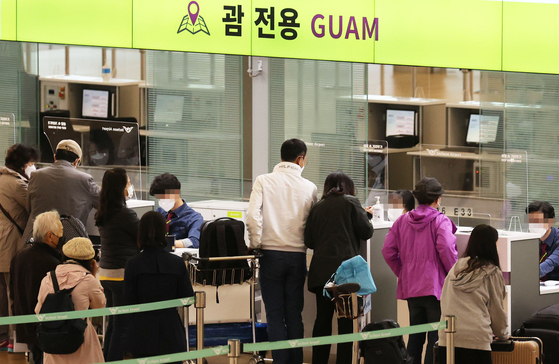 
Airlines are resuming some international flights as travel demand inches up with the government’s relaxing of pandemic restrictions.

Airlines are resuming routes that were halted due to the pandemic, and offering aggressive promotions to fill planes.

Jeju Air, the largest budget carrier in Korea, announced last week it is resuming a flight between Busan and Saipan starting on Dec. 1. The route was suspended in March 2020.

Flights will run once a week on Wednesdays.

Jeju Air also recently announced it would operate 38 flights on its Incheon-Guam route from Thursday through late January. They will be the first flights on that route since March 2020.

Jeju Air will fly to Guam on Thursdays and Sundays in November, and four times weekly in December.

Asiana Airlines announced Monday it is resuming its Guam route starting Dec. 23, “as demand for overseas travel rises with the ‘With Corona’ scheme.”

The airline is resuming the flight after 18 years, as it sees new opportunity in the destination.

Asiana Airlines will fly to Guam twice a week on Thursdays and Sundays.

Air Seoul is giving away free one-way domestic flight tickets to customers that purchase a round trip ticket to Guam, which costs at least 544,900 won ($460) including the fuel surcharge and airport tax.

But growth in demand for international flights is not as dramatic as what the travel industry hoped for by now.

“The vaccinated population [in Korea] surpassed 40 million [nearing 80 percent of the population], and vaccinated people are allowed to travel to multiple places - Hawaii, the Maldives, Guam, Saipan, Thailand, Singapore, Spain and France – without a quarantine period,” said Kim Hyun-yong, an analyst at Hyundai Motor Securities.

“But travel demand is not improving because of worries, like a destination suddenly strengthening its regulations without prior notice, the resurgence of Covid-19 cases and the number of patients that require intensive care centered in Europe.”

The number of outbound passengers from Incheon International Airport in October was 156,666, up 49.7 percent on year, but still down 95 percent from the same month in 2019 before the pandemic.