The Kiwoom Heroes on Saturday defended their signing of a former major league player with a history of domestic abuse, saying the case wasn't as serious as it had been known.

Earlier in the day, the Heroes announced their acquisition of infielder Addison Russell, the 2016 National League All-Star for the Chicago Cubs, under a $530,000 deal for the rest of the season. Russell is filling the foreign position player spot vacated by Taylor Motter, who was released on May 30 after batting .114 in 10 games. 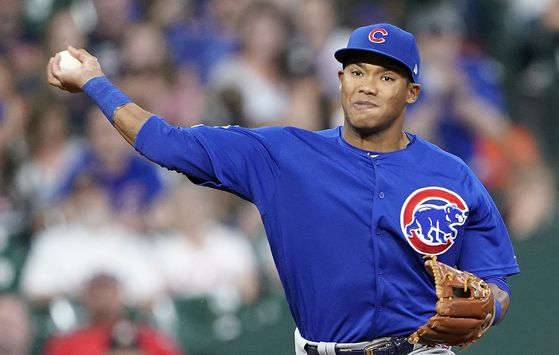 While few would question Russell's baseball pedigree — the former first round pick had 21 home runs and 95 RBIs in his lone All-Star season and is still just 26 years old — he does bring some off-the-field baggage. Russell served a 40-game suspension from late 2018 to early 2019 for violating Major League Baseball's domestic violence policy. Russell was accused of abusing his then-wife, Melisa Reidy, who detailed years of abuse in their marriage in a blog post in 2018.

Heroes' general manager Kim Chi-hyun told Yonhap News Agency that the team did its due diligence on Russell's past. Kim said he heard directly from Scott Boras, the uber-agent who represents Russell, that the player had been penalized by MLB over a text message, instead of any physical abuse.

"If he had engaged in physical abuse, he would have been banned for 80 games, but he served only 40 games," Kim said. "Obviously, what he did was wrong, but we felt it wasn't bad enough that he should no longer play baseball."

Russell has only played second base and shortstop in his minor league and major league career. The Heroes are already set at those two positions, with former MVP Seo Geon-chang at second and All-Star slugger Kim Ha-seong manning the shortstop position.

Kim said Russell will be primarily playing his two natural positions, and the team already has set up plans to work Russell into the infield mix and move existing pieces around the diamond.

Kim acknowledged that the Heroes had also been in talks with another former big league All-Star, Yasiel Puig. The flamboyant outfielder best known among Korean fans for his time with the Los Angeles Dodgers from 2013 to 2018, Puig became a free agent after last season.

"We felt we had a chance to sign him," Kim said. "But Puig decided he should give MLB another shot.”

Addison Russell announces arrival with two RBIs and a run