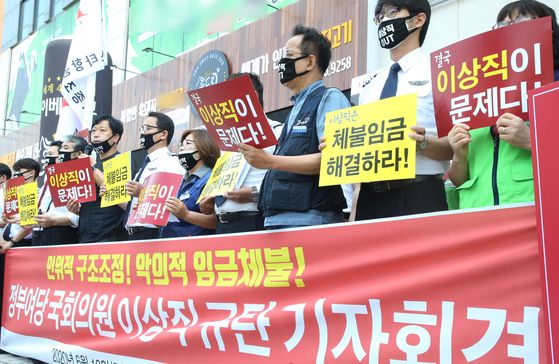 
Jeju Air's planned acquisition of Eastar Jet is up in the air as the two parties fail to find common ground over a number of issues, including Eastar Jet's insistence that the larger airline pay off some of its existing unpaid wages.


Eastar Jet, which shut down operations in March, asked Jeju Air to help shoulder the burden of the unpaid wages, according to local media reports. The airline recently proposed that its employees forgo their wages for three months, while it will pay off some overdue payments and Jeju Air pay the remaining amount.

Jeju Air refused to confirm the report, but did say that it does not have any responsibility to pay the unpaid wages.

“It is common sense that it is fundamentally the responsibility of the [current] management to provide the unpaid wages to its employees,” said Yeom Seung-han, a spokesperson for Jeju Air.

Eastar Jet lost its air operations license last month after it had suspended operations for 60 days. The license, granted by the national aviation authority, permits an aircraft operator to use its aircraft for commercial purposes. To regain the license, Eastar Jet needs to go through safety checks, which will take three weeks.

Jeju Air was already aware of the unpaid wages, according to Lee Chang-gil, who voluntarily resigned from Eastar Jet a month ago.

“Eastar Jet couldn’t pay workers since February. […] Eastar Jet recently suggested that employees return their pay from April through June if the situation heads for the worse, which is where the airline is heading.”

Lee added, ”For Eastar Jet to resume operations, it needs to pay all the debt, but that is realistically difficult until the government’s decision to provide aid or the acquisition deal closes.”

Eastar Jet last week announced that it would discuss the appointment of new executives and an auditor at the meeting.

“Eastar Jet has the right to hold a shareholders’ meeting, but the problem is the executives and auditor to be appointed are to be proposed by Jeju Air,” said Yeom. “We have not yet reached the stage to make such a proposal. Such a proposal should be made right before the deal closes or after it has been closed. The agenda is difficult for Jeju Air to understand.”

The due date for the deal hasn’t yet been confirmed, according to Jeju Air, because the conditions for the acquisition haven’t been met yet.

Jeju Air and Eastar Jet need to gain approval for the deal from the authorities in Thailand and Vietnam. Both countries have not yet given the green light.

“Other prerequisites that can’t be unveiled have to be met,” according to Yeom.