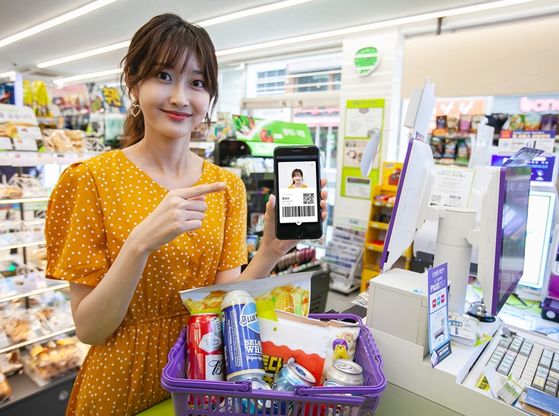 A model buys beer using a digital driving license on the PASS app at a CU convenience store. [BGF RETAIL]


The three big telecommunications companies — SK Telecom, KT and LG U+ — jointly announced Tuesday that they have worked with the police to unveil digital driver’s licenses on the PASS app, an existing identity authentication service provided by the mobile companies.

The new system marks the first time a digital identification system is being rolled out since the Ministry of Science and ICT temporarily permitted the service in September.

The PASS app has 30 million users.

Only a single driver’s license can be used on the PASS app, and it can only belong to the owner of the smartphone. The digital driver’s license does not contain personal information like the owner's date of birth or address. Only the photo of the license holder, a QR code and a bar code are displayed on the screen, which cannot be screen-captured.

The mobile operators said they worked to increase the security of the service through encryption and other systems, including storing information on the blockchain.

Convenience store franchises CU and GS25 are starting to accept the mobile driver’s license in the hopes of raising efficiency and reducing the chance of minors illegally purchasing alcoholic drinks or cigarettes.

Convenience store workers can confirm the customer's identity by scanning the bar code or QR code.

The police agency is looking into whether it can also use the mobile driver’s license system during police work, like traffic inspections. Registering for shared mobility schemes is another area being considered, as this is commonly done online.

Mobile identification services are already being used overseas. LA Wallet, the official digital driver’s license for the state of Louisiana, is one such example.

“We’ve come to provide the digital driver’s license service for the first time in the world on a national scale,” said a joint statement from the mobile operators. The companies “will work on advancing the service and spread the use of the service like in mobile financial transactions or non-face-to-face authentication that has spread through the untact culture.”

“Through continuous collaboration with the three mobile operators, [the agency] will raise the level of the service by supplementing technologies and spreading the areas of use to help people more conveniently and safely utilize the service,” said the police agency in a statement.