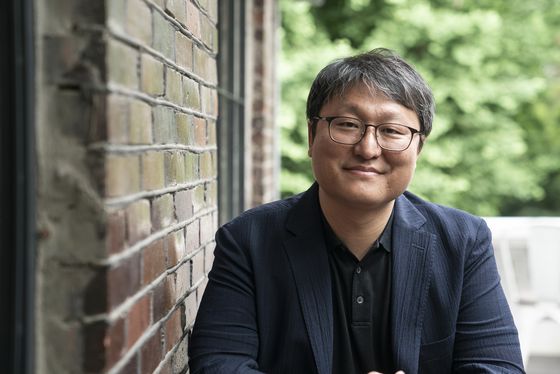 
Audiences were moved with Director Cho Jung-lae’s heartfelt sincerity in his film “Spirits’ Homecoming” (2016), which shed light on Japan's wartime sexual slavery of Korean women. In his latest film, “The Singer," Cho sheds light on himself.


The film’s narrative is simple. It is set in the turbulent 10th year of the reign of King Yeongjo in the Joseon Dynasty (1392-1910). Although class hierarchy still exists, it is no longer as tightly upheld as it was before.

Money has become more important than heritage, and it seems people will do anything for their monetary gain — human trafficking being one such option.

The film centers around Hak-gyu, a pansori (traditional narrative singing) singer, and his journey to find his wife, Gan-nan, who has been trafficked.
In the process, Hak-gyu creates one of the most famous of the five surviving pansori tales, Simcheongga. 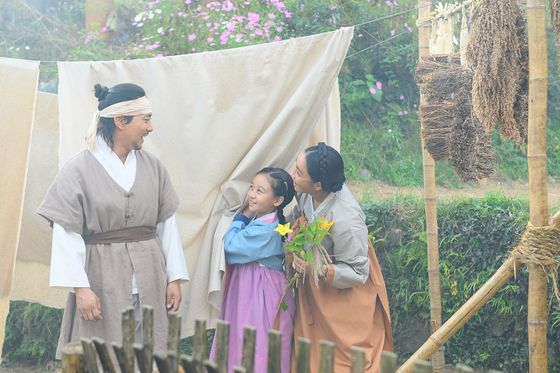 A scene from the film. Hak-gyu (played by pansori singer Lee Bong-geun) and his family before his wife, Gan-nan, is kidnapped by human traffickers. [LITTLE BIG PICTURES]


“There were, until this point, three turning points in my life that changed me completely,” director Cho said during an interview with the press last Friday at a cafe in Samcheong-dong, central Seoul. “The very first one is after I saw director Im Kwon-taek’s ‘Seopyeonje’ [1993].”


Cho says after watching the film, his whole life became centered around pansori. He joined clubs, gave performances and even still makes a living off of it through playing drums.

“When I first learned about Simcheongga in school, the narrative of Simcheong sacrificing herself to fulfill her filial duties didn’t really touch me, although that is what I learned in the textbook,” the director said. “After I saw ‘Seopyeonje,’ I came to realize that the story wasn’t as simple as that. For me, the inspiration for ‘The Singer’ came from [wanting] to track down the origin of how Simcheongga came to be.”

All of Cho's movies are based on times gone by. When asked why, the director said that he thinks that despite technological advances, the way people live has remained timeless.

“I think today’s era is a period of chaos, just like the time period in the film,” Cho said. “But it’s chaotic in a different way because the overall agenda that people pursue has changed. People no longer merely abide by things that are considered socially dominant or acceptable, which is why I think this era feels more confusing. Now people, in turn, ask, ‘Why do I have to marry?’ or ‘Why do I have to have kids?’ If this had happened 20 years ago, it would have been shocking: But I think people nowadays are coming to terms with it. This change may seem drastic, but it feels natural.”

Cho feels that no matter how powerful or rich people are, they are no longer as revered as they once were.

“Nowadays, people would just take pictures and be done,” Cho observed. “In the age of social media, it’s all about expressing how precious, how beloved or how lonely we are. [As people express more] it may be chaotic, but I think we are heading in that direction for the better, but that doesn’t mean it’s not painful. In the film as well, there are still familiar traditions that we have seen, such as Confucianism, loyalty and filial piety. But in essence, I wanted the audience to feel that the past reflects our present.”

Through Hak-gyu’s journey to track down Gan-nan, the film dives back and forth between reality and fantasy depicting his tale of Simcheongga as he travels from one village to another, attracting crowds with his talent and in turn asking them for information about the whereabouts of his wife.

“There are moments when our dreams are so vivid that we don’t know if we’re still dreaming or not,” Cho said. “I wanted the film to be that way too. I believe that we have reached a time when public awareness is higher than ever and we are more sympathetic. We are more aware of each other’s pains, and in that sense I thought the audience could fuse [the fantasy and reality] in a way which could come to an understanding where the traditions and the present are also parallel.”

Cho also stressed that the audience should not view the film as Hak-gyu’s solitary rescue mission.

“Gan-nan is autonomous and determined compared to Hak-gyu,” Cho said. “When I first came up with the script in 1998 for a college term paper, it was about these two childhood friends who naturally fell in love and married. [Although it’s not shown in the film], the relationship between Gan-nan and Hak-gyu hasn’t changed. Hak-gyu is a jester, and he is almost incompetent in finding Gan-nan. If he hadn’t had his young daughter and his friends that he picked up along the way to help him, could he have found Gan-nan? I don’t think so.” 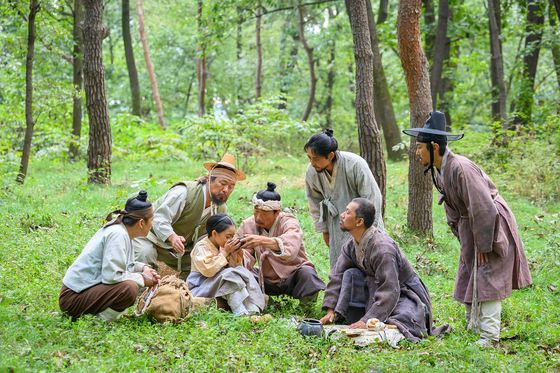 Hak-gyu's friends that he picked up on his way to find Gan-nan do everything they can to look after Cheong-yi, his daughter. [LITTLE BIG PICTURES]


The director admitted that adding those who were closest to Hak-gyu to his journey derived from another life-altering experience he had.


“There was this friend — he was an architect — that I sort of disliked,” Cho reminisced. “This was during a phase for me where I was growing discontent with my reputation of being the diligent one, but not earning money. So I went around judging everyone’s lifestyles. I think he caught onto this and one day asked me if I knew how hanok [traditional Korean houses] were built when we were drinking. He said, ‘Those who are inexperienced [architects] would build hanok with smooth stones. But in order for the house to be sturdy and last for a long time, you need angular stones in between the smooth ones to give room for the house to breathe.’ After sharing this piece of knowledge, he told me that although my friends or those closest to me may feel like they are slowing me down, it’s only due to them that my music, art and life is completed.”

Although Cho hopes that the audience can feel closer to the traditional music through his film, his main aim is for the film to motivate people to think about their loved ones.

“Those who are the closest to you — the inner group of people that holds you together — may not always be the ones who keep you afloat,” Cho said. "Whether it’s family, friends or colleagues, they could slow you down. But we are all living in this same generation, together, right now. We’re not immortal, and there’s not enough time to love and cheer for each other. I hope the film can provide something like that for people to mull over. If they feel that, somehow, in any way, I’ll be content. If they come back to see the film once more, then it’s a miracle (laughs).”