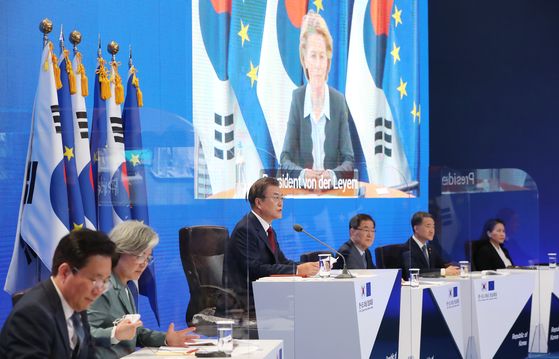 Korean President Moon Jae-in and European Union leaders participated in a videoconference on Tuesday, agreeing to work together to overcome the coronavirus pandemic, restore economic growth and successfully hold the P4G climate change summit in Seoul next year.

Moon held a virtual summit with EU Council President Charles Michel and European Commission President Ursula von der Leyen on strategies for coping with the Covid-19 crisis, as Korea and the EU marked the 10th anniversary of signing a bilateral free trade agreement (FTA) and forging a strategic partnership in October 2010.

During the talks, the two sides agreed to work toward holding the second Partnering for Green Growth and Global Goals 2030, or P4G, summit, which was scheduled to take place in Seoul in June but was postponed to next year because of the coronavirus outbreak.

The P4G is a public-private initiative that tackles climate change and delivers on the United Nations’ Sustainable Development Goals. It aims to strengthen international cooperation surrounding the 2030 target for implementing the 2016 Paris Agreement on climate change. The first summit was held in October 2018 in Copenhagen.

The two sides in a joint press statement stressed the urgency of a global response to climate change and environmental degradation and “recognized that Covid-19 reconstruction measures can provide an opportunity to accelerate the transition toward climate neutrality.”

The leaders “agreed to work toward a successful summit,” expected to be held in Korea in 2021.

The EU leaders, according to the statement, commended Seoul’s “proactive and innovative steps to prevent and tackle Covid-19 in a transparent, open and democratic way.”

They also said they will bolster cooperation and information sharing between their health authorities and centers for disease control to deal with the virus, while aiding developing countries in strengthening their healthcare systems and tackling the economic and social impact of Covid-19.

According to the statement, the leaders are “determined to restore robust economic growth and build more resilient, sustainable and inclusive economies and societies.”

It added that “green transition and digital transformation will be integrated into their recovery strategies.”

The Moon administration has pushed for the so-called Korean New Deal --  which is comprised of two main initiatives -- that aims to stimulate economic growth and create jobs. The Green New Deal seeks to accelerate economic and social migration toward lower carbon emissions and environmentally-friendly systems to combat climate challenges, while the Digital New Deal focuses on expanding digital infrastructure in the Covid-19 recovery process.

They also agreed to strengthen cooperation on the fourth industrial revolution and to work toward a common goal of keeping markets and the trading system open, while also resolving any disruptions to global supply chains.

The parties also discussed the geopolitical situation in light of the pandemic and “reiterated their resolve to uphold the rules-based international order.”

The European Union “affirmed its support to the Republic of Korea's efforts to engage with [North Korea] to achieve peace and prosperity on the Korean Peninsula,” according to the statement.

The South Korean and the EU leaders initially planned to hold an in-person summit in Seoul in the first half of this year but instead held a videoconference at the European Union's suggestion.