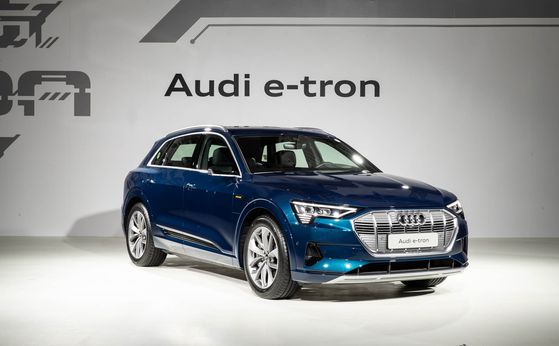 Audi's e-tron 55 quattro is shown at a launch event at the InterContinental Seoul COEX in southern Seoul. [AUDI KOREA]


Audi announced the release of its first all-electric SUV in Korea on Wednesday, entering the premium electric car race dominated by Tesla.

The model was launched in Europe in March and in the United States and China late last year.

Powered by two electric motors — one in the front and one in the rear — the e-tron features four-wheel drive. It produces 300 kilowatts of power.

Its 95 kilowatt-hours battery pack promised around 307 kilometers (190.8 miles) of driving range, according to Audi Korea, although the model did better in driving range tests conducted in the United States and Europe.

The performance depends on “variable measurements” in different countries, according to Jeff Mannering, executive director of the Audi Division of Audi Volkswagen Korea.

Mannering noted that the company's own charging stations around Korea should ease any worries about the car's driving range.

Audi Korea has installed high-speed public chargers at 41 service centers and showrooms in Korea and plans to add 35 more by the end of this year.

With the direct current (DC) chargers, full charges can be completed in less than 50 minutes, and charges up to 80 percent take 30 minutes.

The German carmaker emphasized its commitment to maintaining high-quality components in the new EV model.

There has been “no compromise” in design, interiors and advanced technologies with the e-tron, Mannering said.

"The current global situation reinforces the importance of sustainability economically, socially and environmentally," Mannering said during a launch event held at InterContinental Seoul COEX in southern Seoul. "And emission-free driving systems have their part to play."

Audi is planning to produce 30 electric vehicles by 2025.