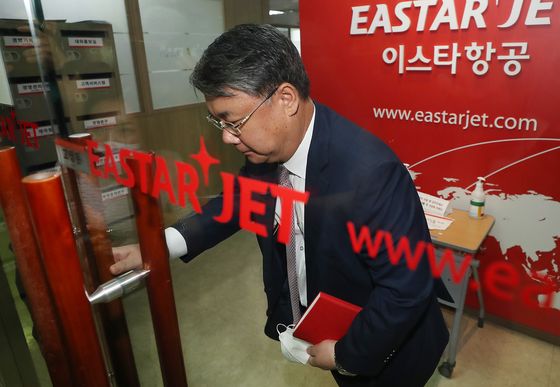 Eastar Jet CEO Choi Jong-gu at the airline’s headquarters in Gangseo District, western Seoul, on Monday after the shareholder meeting ended abruptly and had to be rescheduled. [YONHAP]


The acquisition of Eastar Jet was brought further into doubt as the cash-strapped buyer of the airline failed for a second time in almost two weeks to deliver a list of key appointments.

While Eastar managed to hold a shareholder meeting on Monday at its office in Gangseo District, western Seoul, the meeting was over in less than 10 minutes as Jeju Air, the acquirer, did not make nominations for three key executive positions and for auditor.

The shareholder meeting was originally scheduled for June 26 but was rescheduled then for July 6 due to the lack of Jeju's list.

Eastar will hold another meeting on July 23 to keep the processing moving forward.

I will “do my best until the last moment for Jeju Air to successfully acquire Eastar Jet,” Eastar Jet CEO Choi Jong-gu said as he left the shareholder’s meeting.

Amid the delays in the acquisition, Eastar Jet’s labor union is arguing that Jeju Air was behind Eastar Jet’s shutdown and the buyouts, or voluntary resignations, of its employees.

Eastar Jet stopped flying in March and failed to provide proper wages to its employees since February.

Jeju Air is expected to respond to questions about its role in the shutdown and the buyouts this week.

Last week, Eastar Jet urged Jeju Air to accelerate the acquisition, saying the purchase is its only way to ensure its “survival.” It argued Jeju Air is preventing government support because of the delay of the acquisition.

In the same week, Jeju Air told Eastar Jet that it first needs to resolve some debt issues, including those related to unpaid wages. Jeju Air gave Eastar Jet 10 business days to resolve the debt.

According to Lee Han-jun from KTB Investment & Securities, Jeju Air had 99.1 billion won in cash as of late March, but its operating loss in the second quarter is estimated to stand 100.9 billion won, raising liquidity issues.

“Result of the application for the issuance of 160 billion won worth of new shares should be carefully watched,” wrote Lee in a report published on Monday.

Jeju Air announced the issuing of the new shares in May.

Analysts Yang Ji-hwan and Lee Ji-soo from Daishin Securities said Jeju Air is likely to give up on acquiring Eastar Jet.

“The chance of [Jeju Air] giving up on Eastar Jet is high,” the analysts wrote in a report released Monday. “The number of domestic passengers in May and June increased, but they are rolling out cutthroat competition as they try to expand the supply of new and existing routes. The passenger demand for domestic routes is projected to recover in the third quarter, but the chance of seeing improvement in their performance is low without the recovery of international routes.”

The number of domestic passengers in the second quarter was 5.25 million, down 37.8 percent compared to the same period last year, according to data provided by Korea Civil Aviation Association.