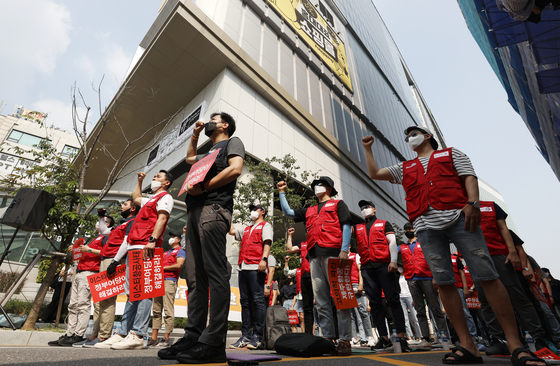 
Jeju Air claimed Thursday it now has the legal right to call off its acquisition of debt-laden Eastar Jet, a move that would not only likely doom Eastar but may also bring into question the acquisition of Asiana Airlines.


The deadline for Eastar Jet, 39.6 percent owned by Eastar Holdings, to meet certain key obligations agreed upon by the two parties was July 15. Jeju claims that Easter failed to meet that deadline and that it can just walk away from the deal as a result.

“Jeju Air yesterday received a document from Eastar Holdings that [it argues] meet the obligations,” said Jeju Air on Thursday. “But there was no actual progress on meeting the obligations.”

Despite Easter's failure to adhere to the timeline, Jeju says that it is mulling its options and will take a comprehensive look at the acquisition to determine whether it is still worth completing.

In a statement Thursday, Eastar Jet responded that it has met the terms of agreement. It also suggested in the statement that Jeju Air has added obligations on top of what was originally negotiated, but that it would nevertheless do its best to satisfy the demands of the purchaser.

“The government previously announced it would provide 200 billion won to Jeju Air if it acquires Eastar Jet,” said analyst Um Kyung-a from Shinyoung Securities. “But if the global travel restrictions continue, 200 billion won won't be enough for Jeju Air or any other airlines to acquire another airline.”

When asked about Jeju Air’s hesitation to complete the deal, Um said, “It’s a regulated industry, and therefore Jeju Air can't be free from the government responses towards its decision.”

“It’s clear Jeju Air’s announcement today says there is no deal,” said Prof. Hur Hee-young, who teaches business at Korea Aerospace University. “It wouldn't have been able to directly call off the deal after the Land Minister’s request to acquire Eastar Jet. Its [Thursday] statement softly suggests it could wait for the hidden card of the Land Ministry, but financial support is outside the authority of a minister.”

Eastar Jet previously argued Jeju Air isn't completely blameless, noting that it hasn't been able to receive any government aid because of the acquisition deal.

Market watchers believe it will be almost impossible for Eastar Jet to find another acquirer at this point, and bankruptcy and the loss of around 1,600 jobs is a possibility.

“Such a large number of job losses has never occurred in the history of the Korean airline industry,” said Hur. “Jeju Air’s decision not to acquire Eastar Jet could set a precedent for Hyundai Development Company to call off the acquisition of Asiana Airlines.