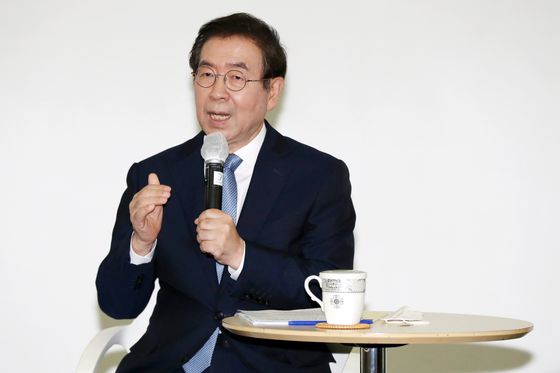 Seoul Mayor Park Won-soon discusses plans for the city to adapt to the post-Covid-19 age during a press conference at Seoul City Hall on Monday. [NEWS1]

The former human rights lawyer said he would work toward that end until late June 2022, when his third term as Seoul mayor is slated to finish. The Seoul Metropolitan Government is also working to partially support Seoul tenants' jeonse fees, or long-term rental deposits, he added.

To prevent rental fees from spiking in response to the local government’s subsidies, Park said he hopes to attain legal authority to limit any consequential increases in the real estate market.

In preparing for the post-Covid-19 age, the Seoul mayor said he will appoint two new honorary deputy mayors to focus on the livelihoods of Seoul citizens and environmental issues in the city. Kim Byoung-gwan, a former lawmaker of the ruling Democratic Party who previously served as the CEO of NHN Games, will be in charge of the former task, while the latter mission will be spearheaded by Lee Yu-jin, a senior member of the Green Party Korea.

Lee Tae-soon, a professor of social welfare studies at Kkottongnae University in Cheongju, North Chungcheong, has been appointed to co-head a special “post-Covid-19” committee in the Seoul Metropolitan Government that will draw various plans for the city in the coronavirus aftermath.

Asked about his own ambitions to run for the Blue House, Park dodged the question, saying he would speak candidly about it another time. "Destiny” will ultimately decide who becomes president, he added.

President Moon Jae-in’s single, five-year term is scheduled to end in May 2022. Many political pundits expect Park to run for the Blue House after serving three terms as Seoul mayor since October 2011. Park's predecessor, Oh Se-hoon, resigned over his failed attempt to end a free lunch program for students.


As for the mounting controversy surrounding the state-run Incheon International Airport Corporation’s plan to hire subcontracted security guards as full-time employees, Park said he understood the pains of both subcontracted workers and students studying hard for full-time positions, saying all of society needs to work toward a solution to the chronic employment issue.