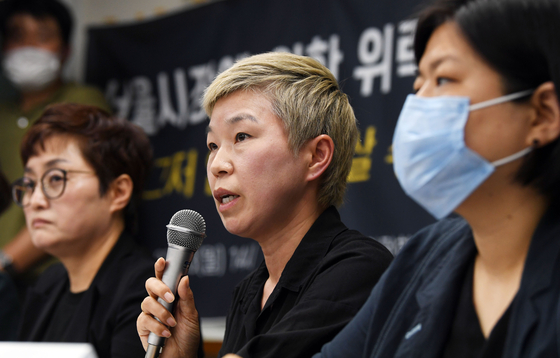 A former secretary of Seoul Mayor Park Won-soon went public with sexual harassment allegations four days after his suicide Monday, saying she had been “consistently” molested by the late mayor for over four years — and that the recent Me Too scandals in Korea that toppled two powerful politicians did nothing to stop him.

The alleged victim did not show up at a 2 p.m. press conference held at the Korea Women’s Hot Line office in Eunpyeong District, northern Seoul, nor was she identified by name. But her legal representative and other women’s rights activists spoke on her behalf, saying Park had sent “promiscuous text messages” and photos of himself in his undergarments to his secretary, and harassed her during and after office hours.

The harassment, they said, “grew worse” as time went by.

Kim Jae-ryon, the secretary’s lawyer, said Park had sexually molested his secretary using his superior rank in the Seoul Metropolitan Government, and that even after former Busan Mayor Oh Keo-don and former South Chungcheong Gov. An Hee-jung were mired in Me Too scandals — and were forced out of their positions before facing trial — Park “did not stop.”

In one account, the lawyer said Park saw a bruise on the secretary’s knee and said he wanted to make her feel better, before he “laid his lips” on the area.

“He summoned the victim to a bed inside a room in his office," Kim relayed, "and physically touched her by asking her to embrace him, and invited her to a secret chat room [on the encrypted messaging app] Telegram to constantly send her promiscuous messages and photos of him in his undergarments.”

Kim claimed that the Seoul Metropolitan Government was aware the victim was in pain because she had described her encounters with Park to her colleagues and asked for help. The office, however, did nothing to save her and kept denying Park’s unsolicited sexual advances, saying he’s “not that kind of person,” the lawyer continued.

The secretary asked to be transferred to another team, but the request was not acted upon promptly, Kim implied. The lawyer said her first consultation with the secretary took place on May 12.

The Seoul Metropolitan Government made no statement about the press conference Monday.

The secretary released her own statement, which was read by the vice director of the Korea Sexual Violence Relief Center, Kim Hye-jung, during Monday’s press conference. The former secretary said she had lived in “pain” for a long time before deciding to speak out, and that all she wanted was to “live like a human being.”

“Living in Korea, a law-governed country, I wanted [him] to be judged by the law and I wanted to receive a humane apology,” the statement read. “The night I was questioned [by police] after summoning the courage to file the complaint, the person who damaged my dignity voluntarily let his down.”

The secretary filed a criminal complaint against Park with the Seoul Metropolitan Police Agency at around 4:30 p.m. last Wednesday and stayed until 2:30 a.m. the next morning to answer questions.

Park’s daughter called the police at around 5 p.m. on Thursday, saying the mayor had made comments to his family a few hours earlier hinting at suicide, ahead of leaving his home before 11 a.m. His body was found by a police dog on nearby Mount Bukak at 12:01 Friday morning.

The secretary said she was “deeply disappointed” in Park’s death and “still [don't] want to believe it.” In the statement, she told her former boss to “rest in peace.”

She continued: “How should I live from now on? I’m a human being — I’m a living person. I hope that my family and I fully return to our normal lives and safety.”

In an emergency press briefing last Friday, hours after Park’s dead body was found by police on Mount Bukak, Kim Tae-kyun, head of administrative services at the Seoul government, denied knowing anything about the allegations against the mayor and said the office had yet to review whether to launch an internal probe about them.

Park’s funeral committee refused to respond to reporters’ questions Monday about the secretary’s press conference, saying in a text message issued to the Seoul Metropolitan Government’s press corps that it would like to focus on the remaining parts of the mayor’s funeral.

Lee Hae-chan, chairman of the ruling Democratic Party and a long-time friend of the late mayor, vaguely said he would like to “console the pain” of the former secretary and “apologize” for the suffering she had to endure.

Ko Mi-kyung, a senior member of the Korea Women’s Hot Line, urged the Seoul Metropolitan Government and police to be serious about the allegations, saying, “The true nature of the case does not disappear just because the suspect does not exist anymore.”

Police, who said they had planned to summon the mayor for questioning about the allegations, said Sunday they would close the case due to his death, as there was nobody to indict.