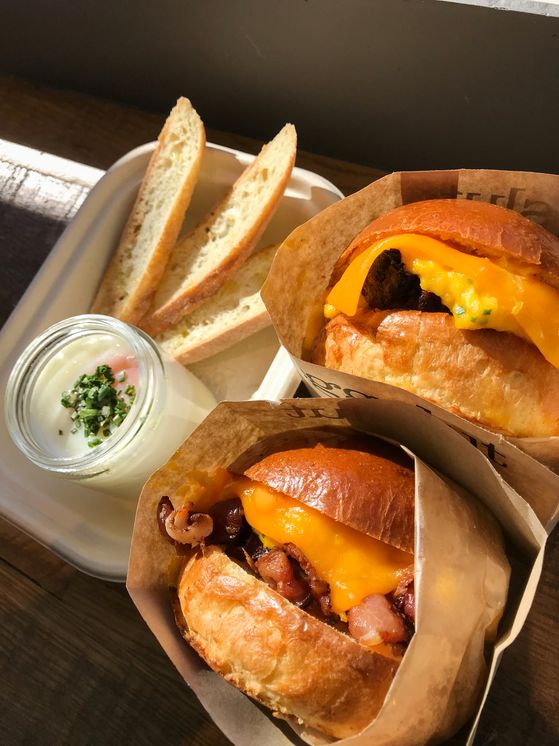 Eggsluts products, clockwise from left: The Slut, the Farefax and the Bacon, Egg and Cheese. [SPC SAMLIP]


After starting as a food truck in Los Angeles nine years ago, fast-food chain Eggslut is arriving in Korea with its first store in Coex, southern Seoul, opening this week.

The Coex branch is set to open at 10 a.m. on Friday. The Seoul branch is the ninth in the world, following five locations in the United States and one each in Britain, Kuwait and Japan.

SPC Samlip, Eggslut's domestic partner for the launch, said the plan is to launch five stores by 2025.

Eggslut is famous for its gourmet-style egg sandwiches that combine the chef-turned-founder's experience in fine dining with a more casual eating experience. Over the past few years, sandwiches containing scrambled eggs rose as a trendy snack in Korea, with domestic franchises like Eggdrop rapidly expanding.

Its signature sandwich, the Fairfax, has two brioche buns holding scrambled eggs, caramelized onion and Sriracha sauce mixed with mayonnaise. The Fairfax is priced at 7,800 won ($6.50). The Slut, the other signature item, offers an alternative for customers who don't want a sandwich — potato purée in a small glass bottle topped with coddled egg. It costs 6,800 won.

"Since opening, we’ve seen a lot of customers from the international market visit us, and Korea’s been a big market for us. From what we’ve seen and what we've heard, I think there’s a very exciting food market for us to exist there among many other brands,” said Eggslut co-founder Jeff Vales in a video celebrating the chain’s domestic launch.

SPC Samlip is one of the largest Korean food companies. It owns bakery chain Paris Baguette and has domestic operation rights to another well-known U.S. food chain — Shake Shack.

All of Eggslut’s kitchen equipment, recipes and some of the ingredients were shipped from the United States, SPC explained.

The brioche bread, however, will be supplied by the Korean company. As for the eggs — an ingredient that sits at the heart of the brand — they will be sourced from a cage-free farm in Korea.

Apart from the launch in Korea, SPC also obtained the rights to run Eggslut in Singapore, where it's already running bakery chain Paris Baguette and Shake Shack. The first Eggslut store in the country will open next year, it said.